Abstract: In the standard optimal stopping problems, actions are artificially restricted to the moments of observations of costs or benefits. In the standard experimentation and learning models based on two-armed Poisson bandits, it is possible to take an action between two sequential observations. The latter models do not recognize the fact that timing of decisions depends not only on the rate of arrival of observations, but also on the stochastic dynamics of costs or benefits. We combine together these two strands of literature and consider bandits of ``evolving shade of gray" instead of two-armed bandits who are either ``white knights" or ``black villains." Stopping decisions in a model with Poisson bandits of ``evolving shade of gray" are qualitatively different from those in optimal stopping or Poisson bandit models. We demonstrate that it may be non-optimal to act immediately upon observation even if successes or failures are conclusive.

Abstract: High momentum returns cannot be explained by risk factors, but they are negatively skewed and are subject to occasional crashes. I explore the timing of momentum crashes and show that momentum strategies tend to crash in 1-3 months after the local stock market crash. Next, I propose a simple dynamic momentum strategy which coincides with the standard momentum strategy in calm times, but switches to the opposite contrarian strategy in one month after a market crash and keeps the contrarian position for three months, after which it reverts to the momentum position. The dynamic momentum strategy turns all major momentum crashes into gains and yields average return, which is about 1.5 times as high as the standard momentum return. It is positively skewed, not exposed to risk factors, persists in different time periods and geographical markets. The risk structure of momentum returns is similar around the Globe and seems to be a consequence of the past-looking momentum portfolio formation procedure.

3.       Mapping the stocks in MICEX: Who is central in Moscow Stock Exchange?

Abstract: In this article we use partial correlations to derive bidirectional connections between the major firms listed in MICEX. We obtain the coefficients of partial correlation from the correlation estimates of constant conditional correlation GARCH (CCC-GARCH) and consistent dynamic conditional correlation GARCH (cDCC-GARCH) models. We map the graph of partial correlations using the Gaussian graphical model and apply network analysis to identify the most central firms in terms of shock propagation and in terms of connectedness with others. Moreover, we analyze some macro characteristics of the network over time and measure the system vulnerability to external shocks. Our findings suggest that during the crisis interconnectedness between firms strengthen and system becomes more vulnerable to systemic shocks. In addition, we found that the most connected firms are Sberbank and Lukoil while most central in terms of systemic risk are Gazprom and FGC UES.

Abstract: Developing the hypothesis of nonlinearity in mean in stock prices this paper investigates the causes of temporary trends. Using the equilibrium pricing model it is shown that the temporary trends emerge when the majority of participants ignore the diffusion of essential fundamental information. It was found that in this case there is a particular situation of imbalance (or disequilibrium) in which, due to the special mathematical phenomenon, along with the trend the independence of successive price increments is observed. This creates an effect according to which the actual predictability of stock prices becomes higher than it is forecast by the observed correlation coefficients. This effect is shown empirically on the example of monthly data on the US stock price index. Using this effect, two types of trends are identified: i) long-term trends related to the innovative development of the society that are interrupted by periods of abnormally high inflation and ii) short-term trends, the duration of which is correlated to the duration of standard business cycles. The fact that these are precisely trends rather than a special coincidence of circumstances, admissible within the framework of the random walk model, is proved by statistical tests. 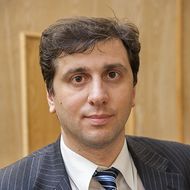