Undergraduate students and trainee researchers participated in the Conference “Lomonosov”

Undergraduate students of the 3rd year and trainee researchers of the Centre for Historical Research from the History Department HSE Saint-Petersburg Oleg Kudinov, Sergey Mikhaylov, Lilya Bolyachevets and Polina Slyusarchuk participated in the International Conference of Students, Graduates and Young Researchers “Lomonosov”. The conference was held from 13 to 17 April in Moscow. 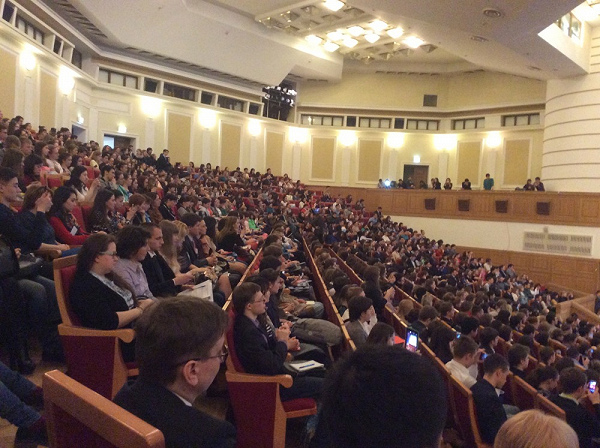 Representatives of the Department of History presented their reports in two sections: “Russian History from the Ancient Times to the Beginning of the XXth century” and “History of Soviet and Post-Soviet Russia”.

Reports of Oleg Kudinov “The Boer War in the Mirror of the Russian Press” and Sergey Mikhaylov “The Development of the Postal Communication between States in the XIX Century and Preconditions of the Creation of the Universal Postal Union” joined the 33 works chosen from almost 300 proposals sent from Russia and CIS. In the work of this section also participated representatives of MSU, St. Petersburg State University, FEFU and other universities. Almost all participants were masters and graduates. In the section a great variety of different reports were presented, for instance, “Sociocultural Identity of the Russian Middle Ages” or “The Charity during the Russo-Japanese War”.
All works were published as a digital publication “The Materials of the International Forum of Young Researchers Lomonosov-2015” (ISBN: 978-5-317-04946-1).

In a report, "Tools of conducting foreign policy of the USSR on the example of scientific and technical cooperation with the countries of the Third World," the guests and participants of the conference were presented the results of a two-year research project "The history of technology and infrastructure in Russia and the Soviet Union."

Scientific and technical cooperation of superpowers in this study was considered as an important aspect of the geopolitical confrontation between the two blocks. It was carried out by establishing interstate relations, involved the exchange of qualified personnel (engineers, geologists, oceanographers, doctors), organization of scientific conferences and assistance in the construction of new industrial and infrastructure facilities. The study was included in the context of technological history and considered the cooperation of the Soviet Union and countries of the Third World as a  part of trasfer of technology.

Conference "Lomonosov" is one of the most famous student conferences in the field of basic science. At the opening ceremony, the rector of the Moscow State University Viktor Sadovnichy noted that the competitive selection of applications in 2015 was one of the toughest: an average of 4 applications rejected - one adopted. It is also important to notice a high level of organization of the conference, among the speakers were many graduate students and undergraduates who presented their dissertations and master's works.