Borscht, Dostoevsky and Nightclubs. What Else Exchange Students Like about Russia and St Petersburg?

There is always so much to see, taste or experience when you are abroad. Just before setting off home to enjoy Christmas holidays with their families, exchange students from University College London (UCL) shared their feelings about Russian food, language peculiarities, clubbing and many more. 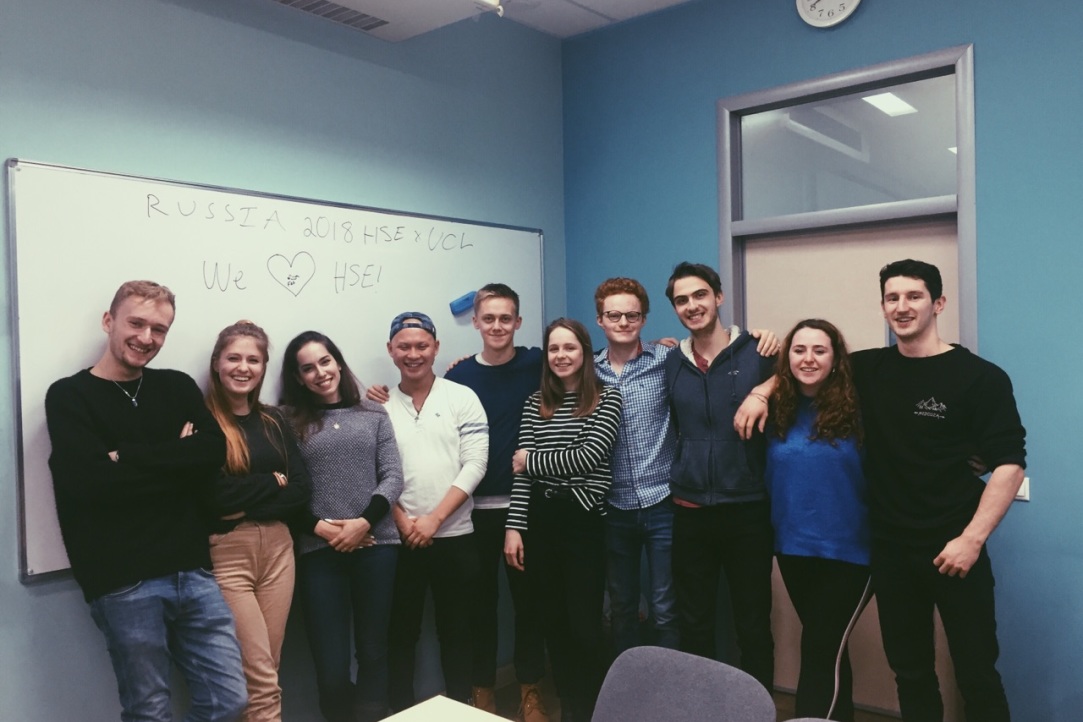 1. What is your favourite Russian dish?

Rory: I really like pirozhki (1) with meat or vegetables. I also like borscht, because it makes me feel warm.

Ania: My favourite is herring with potato, and I also really like chicken noodle soup.

Oli: I would say that my favourite Russian dish is pelmeni.

Elena: The first Russian dish which I tried was borscht in the restaurant 'Dom'. I liked that they serve it with vodka.

(1) The Russian version of pasties.

(2) The Russian version of sour cream.

2. What is the most difficult topic in the Russian language in terms of grammar?

Rory: I find verbs of motion really difficult, because of all the prefixes and imperfective and perfective forms. When I am talking to someone in Russian, I spend a lot of time figuring out which verb of motion to use.

Ania: For me it was imperatives, because it involves knowing how a verb works and where the stress is.

Hugo: Verbs of motion, especially prefixes. For example, 'nesti' is to carry something, but 'prinesti' is to bring something. The prefixes can change the meaning of the word.

Elena: Verbs of motion, because there are so much exceptions and rules.

3. The meaning of what Russian saying or proverb do you like most?

Rory: I don’t know if I can say one on the top of my head. I quite like Russian idioms. For example, 'swimming in the exam' which basically means you are failing it.

Ania: I liked the one which my friend said when we were studying together 'the one who does not work shall not eat'. It means we have to finish our work before we take food.

Oli: I remember there was one in particular when I first started learning Russian. My teacher stuck up above the writeboard 'who does not work with one’s head, works with one’s hands'. It makes a lot of sense.

Elena: I really liked the one by Dostoevsky 'We must love life more than the meaning of life'. I think that’s really true. I also like the saying 'vse idet kak po maslu' (3).

(3) Literally, 'everything goes as if it was buttered'. It has the same meaning as 'go like clockwork'.

4. What Russian writers have you read in original?

Rory: I’ve read Dostoevsky’s 'White Nights' in adaptation and the original 'Queen of Spades' by Pushkin.

Ania: I’ve read Chekhov but not so much yet.

Oli: Gogol, little bit of Dostoevsky, Tolstoy. I have read some short stories by Bulgakov and Chekhov. I prefer Bulgakov the most because I like realism in literature.

Hugo: I was trying to read 'White Nights' by Dostoevsky and 'My Childhood' by Gorky.

5. What is your favourite museum in St Petersburg?

Rory: I really liked the Museum of Political History. The Hermitage is one of my favourites. I’ve been there three or four times, and every time I saw something I didn’t see the first time.

Ania: Definitely, the Museum of Political History. I also like Peter and Paul Fortress. It was amazing!

Hugo: Erarta, the modern art museum, and the Russian Museum.

Elena: I really liked the Russian Museum and the romantic paintings from the 18 century. I liked it even more than the Hermitage, because it is more focused on Russia.

6. What is your favourite place in the city?

Rory: I like walking along the beach in front of Peter and Paul fortress. If you get to look across the Neva, and you see all the building, especially at night when they are all lit up, or at the moment with the frozen river and a sparling light across the bridges. It’s really beautiful.

Ania: Nevsky prospect is one of my favourites, and also the places where little cafes serve coffee.

Oli: There is a little alley by the Winter Palace with the canal (I don’t remember the name) and a bridge along the canal. The Hermitage Theatre is there as well (4).

Hugo: It’s always interesting to be at the Etazhi (5).

Elena: My favourite place is all around St Isaac’s Cathedral. It’s astonishing! When I saw it for the first time, honestly, I was speechless. There are the river Moyka nearby, the Blue Bridge and the Red Bridge, the Bronze Horseman, the monument to Nicolas I.

(4) This refers to the Winter Canal connecting the Neva River with the Moika River.

(5) Etazhi is a modern art space located in the centre of St Petersburg.

7. What should everyone who ever comes to St Petersburg do?

Rory: Definitely, going to St Isaac’s Cathedral and go up there. The view from the top is absolutely amazing!

Ania: They should definitely hang out with Russian people. Another important thing is to explore the palaces, because this is what Saint Petersburg is about, from my perspective. In comparison to Moscow and the other Russian cities I’ve been to, St Petersburg is very imperial.

Oli: Probably, a canal tour. If you are here for a short time, it’s the easiest way to see everything at once.

Elena: It depends on what time of year they come. If it is in summer, it’s really worth seeing the bridge openings, taking a boat tour, visiting the Hermitage, Nevsky Prospect, Alexander Nevsky Lavra.

8. What song could describe your stay in Russia and St Petersburg?

Rory: I’ve spent a lot of time clubbing and partying, so 'Pustite Menya na Tantspol' (6) sums up my time here quite well.

Oli: Wouldn’t it be too harsh to say 'Staying Alive' by Bee Gees? Because I’m not used to cold.

(6) Literally, 'Let Me Onto the Dance Floor', a song by the Russian rap band HammAli & Navai.

(8) The song 'Happy' by Pharrell Williams.