From Skete to Detinets. Exchange Students from UCL Explore the Birthplace of Russia

Under the ‘Study Abroad Programme in Russian Language and Culture’ students improve their language proficiency and explore the Russian cultural heritage. Recently, they have been to Veliky Novgorod. 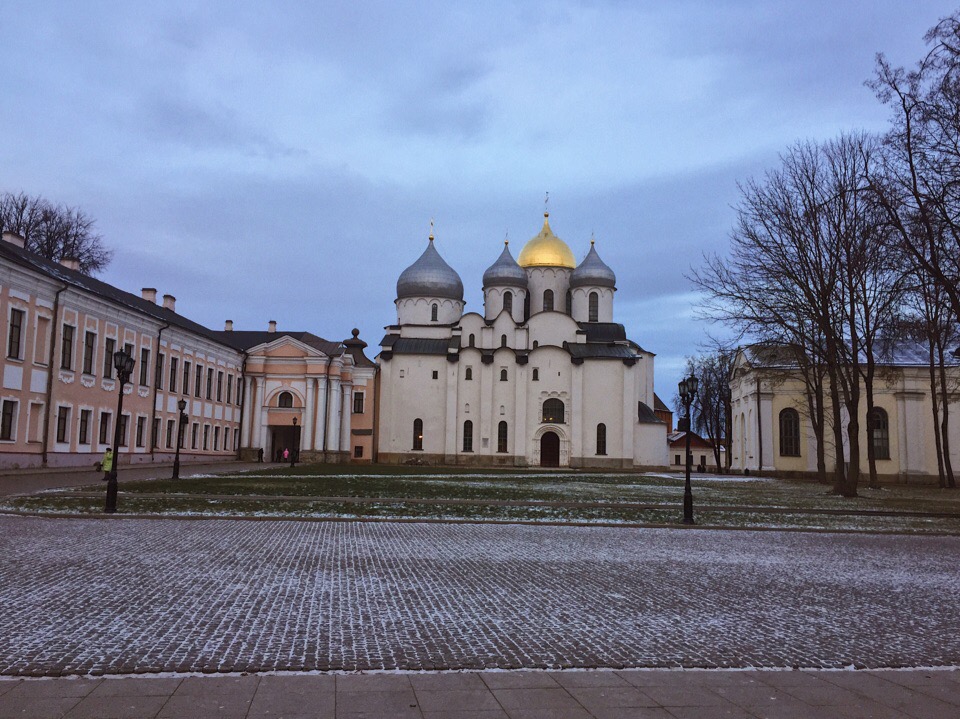 This year, a cohort of 19 students from UCL School of Slavonic and Eastern European Studies has come to HSE University – St Petersburg for the third time in a row.

Coming to improve their language skills and immerse themselves into the Russian culture, the students could not help but visit Veliky Novgorod, the city that stands at the origins of statehood, economy, culture, and religion.

Like almost all the others, Erik Alstad from Norway majors in Russian Studies. He has been learning the Russian language from scratch for two years. 'The experience of going to the country where you are learning the language is really helpful. Here for the first time we moved from discussing grammatical theory in English to constantly speaking Russian. It helps to overcome the barrier of being able to speak fluently', he said. 'At first, the most difficult part was grammar, but now it is more about irony. I am always trying to use the language for something that is different from writing and grammar exercises where you focus on making sentences correct. That is much more difficult but also more valuable and rewarding', he added.

Originally from Lithuania, Guoste Jonaityte got used to watching videos on YouTube and listening to audiobooks in Russian. It pays off – she speaks Russian almost faultless. Moreover, it seems she has fallen in love with the city. 'I have never met such people in big cities as I met in St Petersburg. Although they have intense lives, they do not forget to help each other, or to say some nice words. Probably, that is because I am living in the city centre and studying at a good university'.

Arianna Cantarelli from Italy is the only student in the group who studies Comparative Literature. She reckons that the Russian language is cute. Oh, is it? 'For example, you have shortenings that sound adorable, like ezhik [literally, a little hedgehog], or knizhka [a little book], or mostik [a little bridge]', she said.

There and back again

On the very first day of winter 2018, a bus with the group students hit the road from the centre of St Petersburg to the cradle of Russia, Veliky Novgorod (Novgorod the Great).

'Around 178 versts separate these two cities', announced the tour guide and added that one verst, an obsolete Russian unit of length, equals 1.07 kilometers.

Founded in the middle of 9th century, this city has kept the treasury remnants from the past when the local forests were inhabited by the Slavic tribes. As Novgorod was a part of a major trading route ‘from the Varangians to the Greeks’, European and Asian merchants often attended the city.

One of the most well-known facts about Novgorod is that in 862 the Varangian named Rurik was invited to run the city. How come that the early Slavs addressed to the representative of the Vikings? Well, there are lot of versions why exactly they did that. For the sake of brevity, let us leave them out, and go back to the journey.

The first stop was Peryn Skete on the Nativity of the Mother of God, a small monastery nestling on the shore of lake Ilmen in 6 kilometers from Novgorod. The history of Peryn Skete is closely connected with the history of the Baptizing of Rus. During the pre-Christian period, there was an ancient shrine of Perun, a pagan god of thunder and lightning – hence the name of the skete. Prince Vladimir directed to establish the idol of Perun at this site back in 980. It was the same Vladimir who baptized Rus 8 years later, in 988.

There was a little wicket gate with a low crossbar at the entrance, and the students had bow in order to get in.

'Probably, because there were not so many people, we had an opportunity to get much more of a sense what Orthodox Church is about', said Arianna.

Covered with ice, lake Ilmen astonished the students with its vastness. After spending a while sliding on the smooth surface of the solid water, the students set off for the second sight.

The exuberant and picturesque St George Monastery is set in lakefront. This monastery is regarded as a treasure of the Russian medieval architecture, a reflection the loftiest ideas of beauty and harmony. Once you have entered the site, there are many things to scrutinize – the silver or sky-blue domes resembling giant onions, the belfry of 52 meters high, or the limestone age-old walls.

Afterwards, the students headed right to the Novgorod Kremlin, or Detinets as it historically was called. Occupying the area of 12.1 ha, the Kremlin shelters religious and cultural gems. The Chamber of Facets in Gothic style, the tiny Church of Andrey Stratilat, the marvelous Cathedral of St Sophia the Divine Wisdom and others are located there.

Entering thick red-stone walls it is easy to spot a giant bronze monument in Neo-Byzantine style. It is called the Millennium of Russia, and it was settled in 1862 to commemorate the thousandth anniversary of Rurik's arrival to Novgorod.

The monument features the milestones the Russian history and the historical characters who contributed the development of the country – from grand princes and princesses, tsars and imperators to spiritual leaders, scientists and artists.

After having a walk on the cobblestone routes of the Kremlin, the is the group finally reached the Cathedral of St Sophia. Built in the mid-1000, the cathedral had an important religious role in the medieval Novgorod, and it has been keeping its status till now.

'I really liked the Cathedral of St Sophia where we saw icons that were painted hundreds of years ago, and it was not like in a museum because people were actually praying. That was genuine, and this impressed me the most', Guoste summed up.