The third meeting of the year 2013 of Students’ scientific society of the Department of applied political science was held on the 13th of November.

The guest of the day was Mr. Dmitry Sukhov, the Head and founder of the NGO "Munitsipalnaya Pila" (Municipal saw), who is also the Head of the St. Petersburg office of the "Fund for struggle against corruption". 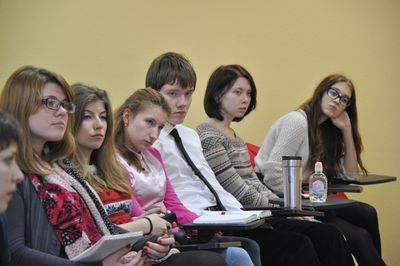 After brief lecture on the reasons and mechanisms of controlling local authorities the discussion involving wide range of questions took place. The initiative of citizens to take measures to control authorities, the lack of volunteers, problems of youth’s nonparticipation in elections and, in particular, in municipal elections, the problem of so-called “holes” in local and city budget, and the future replacement of the federal law number 94 by the federal law number 44 (“On the contract system”) – and this is not the full list of topics which were managed to discuss. Consequently, it can be concluded, that despite few students were present the meeting was dynamic.

Unfortunately, the second lecturer Mr. Mikhail Gorny, the docent of the Department of applied political science, who could have told students about the practice of public-consultative organs in the structure of authorities, could not attend the meeting.