Majority-minority relations in the transition from empires to nation-states

The project brings together researchers from the Higher School of Economics, St Petersburg, Russia, the Karelian Institute of the University of Eastern Finland and the Max Planck Institute for the Study of Religious and Ethnic Diversity of the University of Goettingen, Germany. The overall aim is to examine in a multidisciplinary and comparative perspective the governance of ethnic, linguistic and religious diversity at times of transition from Imperial to nation-state political formations in Eurasia. Domestic and international influences on conceptions of the status of minorities will be examined as well as actual legal implementation of those concepts. From close analysis of the situation at the end of Empire, the consortium will be able to make comparisons and draw conclusions as to the influence of earlier developments on the situation of minorities in post-Imperial contexts.

The project’s research design is comparative. Systematic comparisons will be made across Empires, across historical time and across markers of cultural boundaries. The Russian Empire in the early twentieth century and the Soviet Union in the late 1980s make up the core case studies. These will be supplemented for comparative purposes by involving scholars of the Ottoman, Habsburg and British Empires, for example. International documents including those associated with the Versailles process, the League of Nations, United Nations, and the Helsinki Final Act as well as the monitoring mechanisms attached to them will also be included. Methodical analysis of historical approaches to conflicts over minorities in terms of language, religion, ethnic and cultural identity at times of intense political change will be used to inform our understanding of current conflicts over the status of minorities. The collaborative research project will thus not only facilitate capacity-building and international cooperation between high profile research institutions, it will also provide background knowledge for key issues of public policy making in the contemporary period. 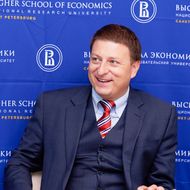 Director of the Centre for Historical Research, Professor

On February 15, 2019 the Center for Historical Research at the HSE in St Petersburg hosted an ERA.Net research seminar. Etienne Peyrat (Sciences Po Lille) presented his talk  "Imperial transition and regional integration in the South Caucasus (1900s-1930s)".