Recently our students have returned to St. Petersburg after a six-month student exchange program. They spent a semester in China and Japan, which was quite an unusual choice. We have asked them about their journey and experience of other cultures. 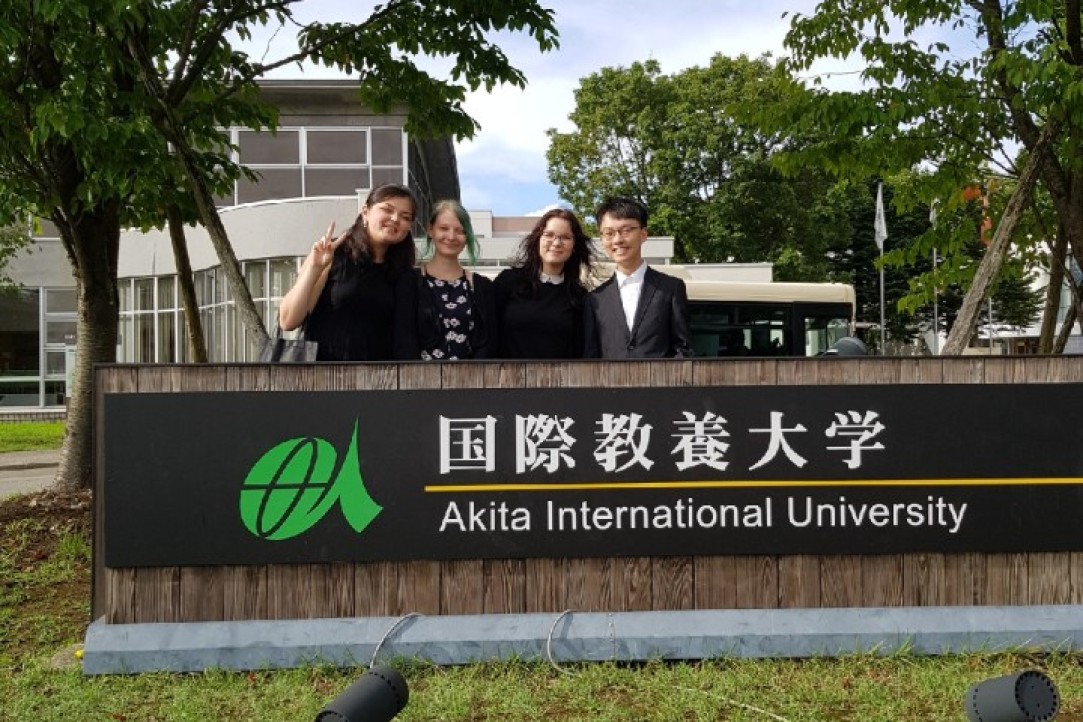 Why have you chosen Asia and decided to go for an exchange to China (Japan)?

Darina Chernyshova: I've chosen China because I decided to focus on studying the BRICS countries and took Chinese as the second language. I thought that a semester in Beijing could become an incredible opportunity for getting new knowledge and improving the language skills.

Polina Zhvanko: I've chosen the Asian region as an educational track and as the culture which is inspiring and impressive for me. I've always wanted to learn Chinese, as this region is very perspective and progressive.

Tamola Talipova: I became obsessed with Asia at school, and it’s not because of anime, as my friends used to joke. Probably, the culture and traditions attracted me, moreover, people seemed very interesting to me. I've chosen Japan, because by that time I began learning the language, moreover, this country had always been a distant dream for me. So I've decided to go there and nowhere else.

Can you tell us a little bit about the university? Was it difficult to study in English? Did you like the curriculum?

Darina: The university is situated in several buildings and a couple of dormitories. They all are located together on the huge campus territory. I was studying in the nearest building to my hostel, luckily! Studying in English was hard at first, but mostly because of the specific accents. I got used to and was comfortable with it.

Polina: Chinese universities differ a lot from Russian ones. For example, the university is a residential area with its shops, hospitals, schools, educational buildings and much more. Unlike the Russian campuses, you cannot go out from the territory of the Chinese university for months and have everything you need. In addition, there is no usual schedule. At my university, classes were lasting for 45 minutes each, classes start at 8 am and end at 10 pm. I was lucky, I had 3 classes in the middle of the day. It wasn’t difficult to study in English, probably, because in Russia almost all of my classes were also in English. The teachers were delighted with the fact that they were visited by students from Russia, so they were always ready to suggest something.

Kamola: The university was located in the Akita city, or rather, outside the city, in the forest. Amazing place, the views around were reminding me the footage from Miyazaki films. We were living on the campus, where there was everything and even a small shop. Education in English was not a problem, I felt quite comfortable. I was more worried that I could not understand some students, because they were using a huge amount of slang, or simply their accent was strong, but even that was over two weeks later.

I liked the teachers so much! They are very caring people who are always ready to help you. They respond to students’ letters very quickly, and you actually communicate with them as with your relatives. At least, my teachers were like that. The atmosphere at the university was peculiar, we lived in the campus for two weeks without Japanese students, and because there was no Wi-Fi in the rooms, everyone went out in the hall. They also had clubs that united us.

Darna: We met Chinese students very rarely, but if it happened, they were very friendly and always ready to help us.

Polina: Our courses were on the Masters’ Program, that is why all students were international. Chinese students and volunteers were always ready to help.

Kamola: Yeah, they were helping us a lot, treating us like children. It was hard for the first time with Japanese students  because we were afraid to talk to them, they were too, funny. We lived with Japanese room-mates and with their help we found friends. We needed time to get uses to each other.

Tell us about your impressions of the country.

Darina: The country impressed with its unique and amazing mentality, it seems like people are more friendly there. The only problem was with the constant request for photo, it made me a little bit uncomforable sometimes.

Polina: I had worked with the Chinese people before my trip to, so I knew about their habits and mentality. Tha myth that was busted is that everything is cheap in China. Not everything is cheap, and many things are in fact more expensive than in Russia. You need to know where to buy and where to look for. Also, I adore China for a combination of the incompatible, like the skyscrapers near the hutongs (a type of the Chinese medieval urban buildings). I adore it for traditions that persist in the fast-developing country. I got overall positive impressions.

Kamola: I fell in love with Japan and still can’t move away from it. I didn’t have any stereotypes, I even didn’t watch different videos and blogs about Japan. I decided not to look at photos of the city for not having any expectations. I wanted to explore country by myself without another’s opinion.

Tell about the most memorable occasion from the exchange program.

Darina: The day we went to the Great Wall of China. No matter how trivial it sounds, but this is probably the most impressive sight I remember. The scale is amazing, as well as the views from there on the mountains. The best thing I've ever seen!

Polina: The most memorable moment is my climb to the Avatar mountains (Zhāngjiājiè mountains).

Kamola: The most memorable event was a meeting with a Buddhist monk in Sendai, I went there with my friends for the weekend. For the first time we tried Couchsurfing. It all turned into a wonderful journey, he told us different stories and showed us the cty. It was exciting! In general, there were a lot of events, ranging from long walks to the Sea of ​​Japan, to the visits of shopping centers.

What did the exchange program give you? What would you advise students who are just thinking about taking part?

Darina: The exchange program allowed me to look at the culture of another country, to learn it better. Also, I started to feel free, as if I can do anything! And for sure, constant contact with native speakers helped me to improve my language skills in Chinese. I advise students who think about exchange programs to take this opprotunity. It gives unforgettable and valuable experience.

Kamola: The program gave me the language practice, a lot of amazing friends and teachers I am keeping in touch with.  It revealed to me lots of new things, and now I am trying to work on myself. I advise students not to take a lot of stuff with you, I regretted it 100 times! To be serious, of course you should try this, it’s a great opportunity to expand your horizons!