Maria Bakieva, the third-year student of ‘Economics’ educational programme, went to London about half a year ago to study at University College of London. Now she is travelling around Great Britain, walking in the parks and going to the theatres. Maria told us why she missed HSE University – St. Petersburg cafeteria, what accommodation is less expensive, and why ‘Harry Potter and Cursed Child’ is remembered by her. 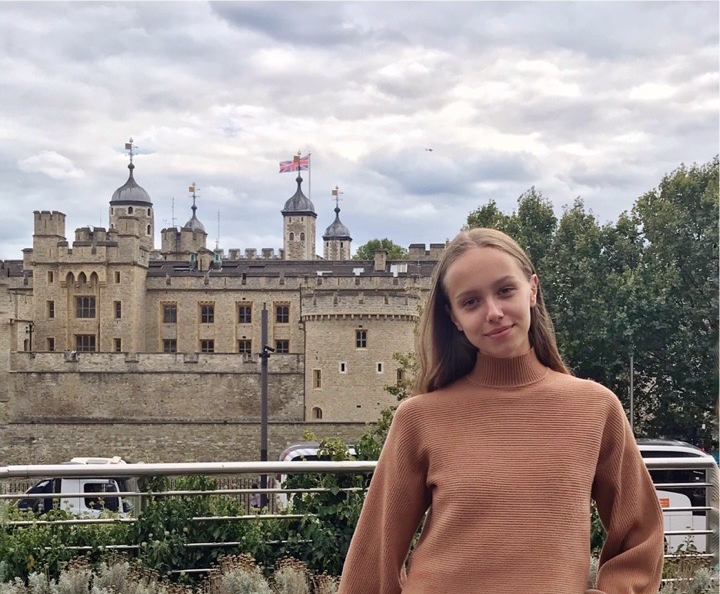 Why did you decide to go for an exchange semester?

The thing is that I wanted to study abroad when I was in 11 grade. I subscribed to a girl who had gone to the United States by that time. Every day she shot some amazing videos, and I wanted to live the same way for a while. Thus, when I was choosing a university, I was also looking for international exchange opportunities, and I found them at HSE University – Saint Petersburg.

I went on an exchange just in my third year. When you are a freshman, you barely can go to study abroad because you do not meet the terms, you get acquainted with your groupmates. Moreover, you have to pass all the exams. Going for an exchange is easier in the third year - study load is not so intensive, you have fewer compulsory subjects in your curriculum, and it is easier to make your study plan. Having learned that HSE had a partnership with universities of Great Britain, I decided to apply. I have wanted to go there since I was a kid and started learning English and reading texts about Big Ben, Trafalgar Square, and Westminster Abbey. Currently, I am studying at University College of London which takes high positions in the main world university rankings. More than 20 Nobel Laureate went to UCL, so the university makes a great contribution to science.

What changed in your studying process?

At UCL, students choose courses to make their curriculum. We were given a list of all the courses, and we had to choose the most interesting ones. After the subjects are chosen, you should discuss your prospective schedule with local programme office representatives. If there are not any schedule conflicts, you are allowed to attend these courses. For the entire academic year, I had to take exams only on two subjects: Econometrics and Macroeconomics. Overall, I took 4 courses to get ECTS number required.

As students form their curriculum, they are not divided into study groups as at HSE University – St. Petersburg. That is why I do not meet the same people while attending classes, so it is more difficult to find friends. However, you can meet more people there.

What is the difference between foreign and Russian students?

It seems to me that Russian students focus more on studying and cramming, at least a lot of students from my educational programme do that. Students attend various student organizations and look for a job. In Russia, students study more because they have more tests and exams. In the UK, I only took two term papers, that was all.

Name three things, which surprised you in Great Britain

Not only students but all the people are more friendly here. Locals often smile and greet each other, sometimes they even greet strangers and say hello to bus drivers.

Many animals live in local parks, mostly squirrels. They seem to be everywhere. One can also find a great variety of birds such as swans, ducks, and geese here.

At the very beginning, I used to think that London was a wealthy city, but it was not. You can walk down the streets among posh houses, but broken shops will be next to them.

Once I went to look for an apartment to rent not far from the city centre. When I got off the underground, I saw a lot of posters about a series of robberies which happened in the city. It seemed to me that people looked down on me, and I did not feel safe by this reason.

What difficulties did you have for the first time?

As my English was not perfect, the language caused some difficulties. I could barely understand the accents of locals. Once I went to Scotland, and there I could ask a person plenty of times to repeat what he or she just had said.  In spite of all these attempts, I was not able to make out what this person was saying to me.

I also found it challenging to talk about some day to day matters, I was not really ready for that. As an example, I did not know how to ask a question about the rental conditions and deposits right.

Actually, looking for an apartment was difficult. I arrived (in London) in advance to find a place before the classes would start. I contacted forty people, and only two of them replied to me. The university also provided accommodation, but the price was less affordable. Thus, I decided to find a room and share it with my friend. Together we pay more than 900 pounds (per month) for a room, more than 70 thousand rubles. So each of us pays about 40 thousand rubles per month. Renting a room in the dormitory costs 700 pounds per person, which is about 60 thousand rubles, but you are given a big room in Central London, near the university.

What new food have you tried?

Here many people eat Fish&Chips, I also have tried Scottish breakfast, but it is not much different from English breakfast. In general, the food here is fried and not quite healthy, so one should not eat it often.

As for me, I prefer a home-cooked meal. It seems to me I even miss the food from HSE University – St. Petersburg cafeteria because its food is simple and delicious. I try to cook at home, but I do not always cook as well as they do at HSE University.

What do you spend money on?

There are enough shops and one can find a wide range of products to buy. Although the food in cafes and restaurants is expensive, buying groceries costs almost the same as in Russia. Some products are even less expensive in London, for instance, milk or berries.

Sometimes I travel to other cities, so I visited Oxford and Cambridge. It is more convenient to travel between cities by train. It took me an hour to get to Oxford and Cambridge from London. A round-trip ticket costs about a thousand rubles. When I travelled to Scotland, I paid three or four thousand rubles for a one-way plane ticket. It is also possible to get there by train, but it will take 10 hours.

I went to see Harry Potter and the Cursed Child, a play in two parts. I paid 80 pounds for the ticket, which is about 7 thousand rubles. The play was amazing, the actors played great, and Dementors were flying all over the theatre hall.

The museum building is handsome, and a big beautiful Christmas tree stands in front of the museum. Moreover, there is the skeleton of a large whale under the ceiling.

Deer live in Richmond Park and got used to people because the Park is situated in the very city centre. Deer watch visitors because they want to make sure that no one will hurt them. However, when all the deer are staring at you at the same time, it is a little bit creepy.

If one wants to have a look at the location where Harry Potter movie was shot, he or she can go to Oxford University. When walking around the building, you feel like you are in Hogwarts. There are also guided tours devoted to the university's history.

What did you gain from this exchange semester?

I got bolder since I improved my communication skills by speaking English, so now it is easier for me to contact people, especially when I speak my native language. I am naturally a very timid person, and it was challenging for me to turn to a stranger and ask him or her a question.

Now I understand better what I want from my life. I took the course ‘Creating a new business’. We developed our business plan there, and I realized that I got interested in the subject. Ideally, I would like to create my own business or product.