We use cookies in order to improve the quality and usability of the HSE website. More information about the use of cookies is available here, and the regulations on processing personal data can be found here. By continuing to use the site, you hereby confirm that you have been informed of the use of cookies by the HSE website and agree with our rules for processing personal data. You may disable cookies in your browser settings. ✖
Regular version of the site
Advanced search
HSE Campus in St. Petersburg
Topics
All news
Admissions
Education
Research&Expertise
Society
Community
On Campus
Advanced search

Legends and Myths of Modern Economics

On June 11th, 2014 Tomáš Sedláček, Czech economist and author of Economics of Good and Evil  and Homo Economicus gave a lecture at a joint seminar of the International Centre for Social and Economic Research ‘Leontief Centre’ and the HSE in Saint Petersburg. 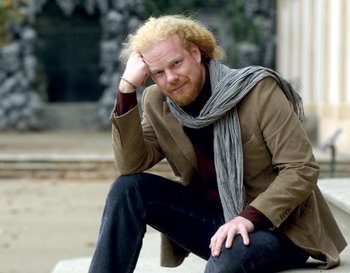 On June 11th, 2014 Tomáš Sedláček, Czech economist and author of Economics of Good and Evil  and Homo Economicus gave a lecture at a joint seminar of the International Centre for Social and Economic Research ‘Leontief Centre’ and the HSE in Saint Petersburg.

Leonid Limonov, Professor at the HSE Saint Petersburg, says that Sedláček is ‘a provocateur of economics, which he definitely loves. Through his paradoxes he provokes economists to think of the limits for applying modern theories while developing criteria for their scientific accuracy.’

During the seminar Sedláček also talked about the analysis of the economic content of various myths and legends and their correlation with modern economic language.  He believes that economics tells the same old stories, but instead of images and myths it uses mathematics, which people today find more trustworthy. A convincing story can attract people and even be partially true.

The Old Testament includes the story of seven fat and seven skinny cows, which presents not only an example of an economic cycle, but also a forecast, which is described as a pharaoh’s dream by our ancestors and as calculation of mathematical models by modern economists, though it still remains subjective. Moreover, ancient Jews not only described the cycle and made a forecast; they also gave recommendations for creating a stabilization fund – to lay up grain in case of a poor harvest.

In contrast to Ancient Egypt, modern Europe has no instruments to limit consumption and economic growth in order to benefit from the surplus during recession or stagnation. On the contrary, the only way out of this negative situation that modern economists can offer is to run up debts – a solution which none of the pharaohs would have ever thought about.
By Tatiana Chernova