My Stay in Saint Petersburg 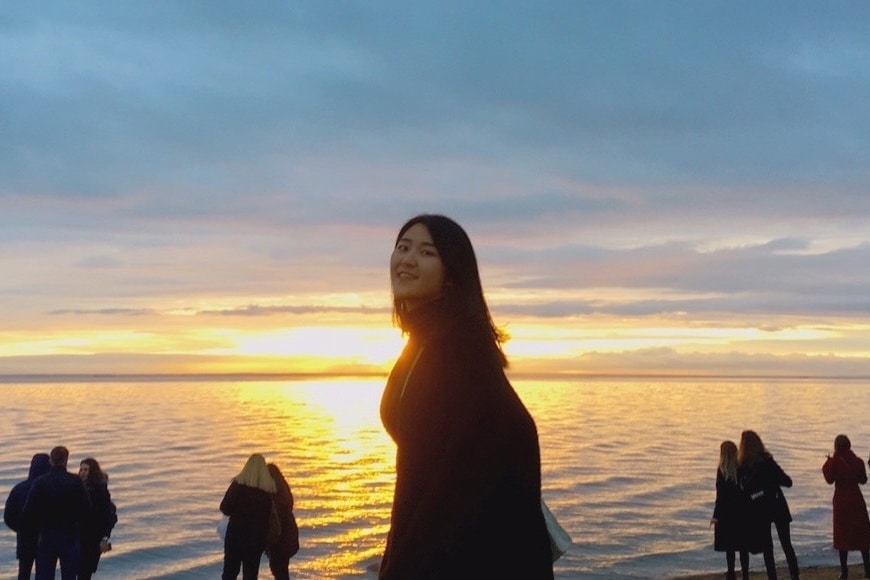 I still remember the weather and the lively and romantic atmosphere when I first arrived in St. Petersburg at the end of last August. Especially when I was standing in the center of Nevsky Avenue one evening and feeling the wind blowing and watching the sunset and night view, ‘Dancing Queen’ of ABBA came out at the very moment, and I have already fallen in love with St. Petersburg.

Seoul, where I lived, is a big and busy capital where 10 million people live, which is more similar to Moscow of Russia. Born and raised in such a big city, maybe it was a natural consequence to be disappointed with the environment of Yakutsk in Russia. Eventually, I came to St. Petersburg last summer looking forward to a city more like a 'real Russia' (or Russia in my head), and from the first day I arrived, I think it was a good decision to come here in Saint Petersburg, rather than other cities. This city has a more European atmosphere rather than the classical Russian atmosphere, and there are no such skyscrapers unlike Seoul, so it always makes me feel traveling. Whenever I cross the road on Nevsky avenue and see the wide, open sky, I can’t help myself taking pictures of it. In addition, the city has a different appearance in every season, thus also gives me a feeling of traveling every season. Over the last year, I have been always paying attention to the surroundings not to miss any changes in the city as the season changes.

With a long day time of summer, I start my day with a pleasant feeling every day and feel lively

The weather in St. Petersburg is very capricious to describe in a word. My friends who do not know Russia well guessed that it might be always cold in St. Petersburg. However, ‘Caprice’ will better explain the weather of this city than the ‘cold’. According to my experience, it is natural to be very cold in winter and gets warmer in spring, and then become very hot in summer, but it was not the case in St. Petersburg. Even though you wore t-shirts yesterday, you might need to wear a coat today. When I check the weather application saying that it will be colder suddenly, I may understand that with my head, but it’s not easy to accept that I have to wear a coat again by heart. Moreover, probably because of the geographical reasons, the weather constantly changes unexpectedly. There were many embarrassing days such sudden shower is pouring out even though the sun is still shining or even unexpected snowfalls in April. Additionally, I am sensitive to the weather than others personally, so the long night of the long winter made me easily get depressed and feel low. However, on the contrary, with a long day time of summer, I start my day with a pleasant feeling every day and feel lively.

Summer here can be represented by a white night. I already had experienced a white night in Yakutsk before, but there was no beautiful night view and streets full of people then, so it was just a disturbance for my sleep. However, here just seeing people enjoying the sun that does not sleep at night makes me flutter. Besides white nights, there are other things that are quite different from the weather in Korea. The first thing is that most of the people wear sunglasses in the city. In Seoul, there are a lot of shades of roadside trees and tall buildings that we can hide from the sunlight, so sunglasses are often worn only in swimming pools or at the sea. But since a few days after I noticed that everyone started to wear sunglasses, I also bought one. Secondly, the weather is not as humid as in Korea, and I love that the summer here is therefore so pleasant if I can avoid the sunlight. But I have not experienced the hottest summer in July and August yet, so I’m looking forward to the summer next year in St. Petersburg.

Another surprising point is that the flower seeds are everywhere in the air in spring. In Korea, we’re expected to have fine dust and yellow dust. But here instead of dust, white seeds float in the air. I was a bit annoyed because we do not have an insect net on the window in Russia and the seeds come into the room through the open window. In the winter which was too long and too cold, the snow had stacked up to the waist. People said that this winter was not that cold than usual, but as I remember it was about minus 25 degrees. But it was not so surprisingly cold as I have experienced the winter of South Korea, which has a sickening windbreak, and the winter of Yakutsk, which has a minimum temperature of minus 60 degrees. The snowy streets, trees, and parks look so desolate that I cannot recall how green they were in the summer, but at the same time they look exactly same as they are illustrated in the paintings. Especially the Palace Square and the frozen Neva River covered up by snow, they are just as beautiful as it came out of the postcards. When the snow melts, it is dangerous and a bit messy, but it was impressive to see how the ice breaks and melts on the river. 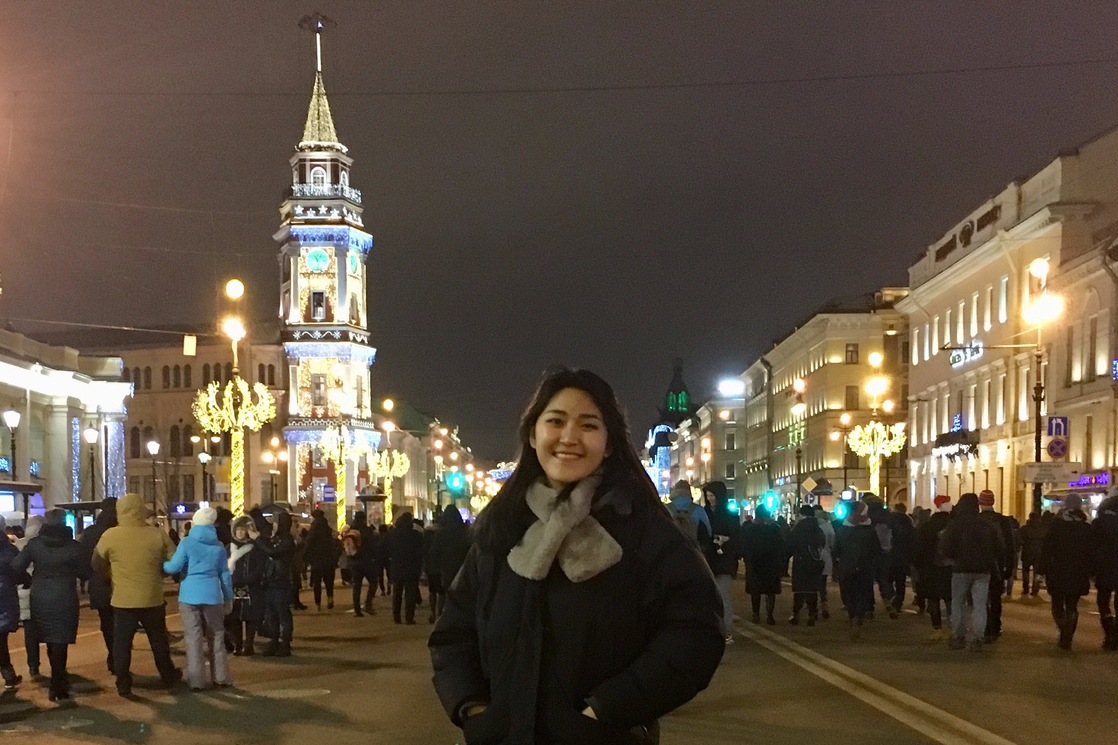 Hermitage which was mentioned above is one of the greatest museums in the world. Besides, there are many museums and tourist attractions such as the Russian Museum, Kazan Cathedral, and St. Isaac Cathedral. Our HSE buildings are scattered all over the city, not gathered together on one campus, so I can see many beautiful orthodox churches and temples on the way to the university every day. Even I could not feel anything special about the churches that I visit while traveling to other countries because of them. Also, there are many famous places such as the Summer Palace and Pushkin in the suburb regions of Saint Petersburg. Sadly, I haven’t had enough time for all of them, but I will definitely visit them during the rest of my stay.

The cultural life of St. Petersburg can be enjoyed in many ways, such as ballet, opera, exhibitions, hockey, film, etc. However, in fact, Russians love to take a walk when spending time with someone. It was a little tough during the cold winter for me, but it is very nice to wander around in the summer, feeling this romantic city by heart. Moreover, there are many festivals in St. Petersburg and it is good to see the huge events and ceremonies of every important anniversary of Russia. Personally, the impression I got while watching the endless Immortal Regiment on the day of Victory is still unforgettable.

Now, I can feel the Russians' kindness in that sharp voice, who are willing to help

Now, some words about real life based on my experience. First, the prices are cheap. Of course, it depends on your country of origin, but living costs are very cheap compared to Korea. Especially, the foods in the mart are very cheap. I haven’t cooked so much in Korea, but here I cook on my own quite often. It seems that I am not the only one, hearing that people often say when someone studies abroad, that person is likely to develop the cooking skill before the language skill. But, eating out costs slightly more and imported goods are far expensive. But shockingly cheap dormitory costs and transportation costs make it possible to live a quite affluent life in Russia with the same amount of the money.

Transportation costs are much cheaper if you use a special card for students, which allows riding an unlimited number of subways, trams and trolley buses for only 1035 rubles a month. Although there are not many subway lines in Saint Petersburg, it is well designed to get to any places quickly and easily. When I first got on the subway, I was amazed by the deep, fast escalator and beautiful interior of the station, but now I am used to it, so I think it can be even faster. It's impressive that many people do not sit and give their sits to the elderly and the handicapped.

The people of St. Petersburg have such warm and kind heart, though they seem so blunt. When I did not know the Russian language well, they felt unfriendly because of the Russian intonations which sound like they are angry and the face without a smile. I was surprised to see that attitude of Russians because when I was young, I was in the US where everyone smiles at each other on the road and have small talk at any time. But now, I also can feel the Russians' kindness in that sharp voice, who are willing to help whenever I ask for help, even though they cannot speak English.

St. Petersburg is often compared to Moscow, and although I have not lived in Moscow for a long time, personally I like St. Petersburg more. Having a very different atmosphere from where I have lived, this city has expanded my view and my stage through new and diverse cultures. I am so grateful for me in the past who decided St. Petersburg where I have never been before as a city where I have to live alone for at least three years.