From London with Love

In early July, 5 students of the education programme “Design” went to London, where they got acquainted with the culture of London and took a short mosaic-making course. Is it difficult to make works of art from tiny glass pieces, what is the Barbican famous for, and where are the best places to spend free time – students shared their experience about their visit. 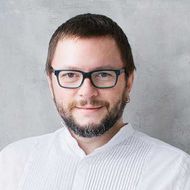 I am always asked: what is the main characteristic designer should have, which allows achieving a success in the professional field. And I always answer that it is not an ability to draw, not a design soft knowledge, not patience, and not even erudition (no matter how important this quality is). No, the main quality for a designer is curiosity, namely its multifaceted mature among which there is a desire to travel, to learn something new, a risk of finding yourself in unfamiliar situations, and courage to try something new. Only by obtaining visual and sensory information from completely different sources, including not only specialized museums and galleries, one can give an unexpectedly bright and outstanding professional results. That is why travelling is, that is to say, the professional duty of designer. An immersion into the new visual environment, accumulation of significant storage of seen and felt experience – it is a fundamental basis of our profession. That is why I am so glad that our students had such an interesting trip. It will play an important role in their future careers. And, yes, in some time the number of similar student trips will increase more and more. 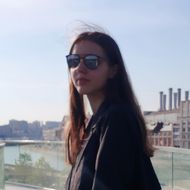 Our study trip to London was made possible by the academic mobility programme of HSE. The main target of the trip was taking a course in London School of Mosaic – the first art school in Great Britain, specializing in the work with mosaics. In terms of the course, we studied the basics of mosaic making as well as we created our own ones. It turned out to be not that simple, since before one start to create his or her own project it is necessary to come up with a picture, choose a colour combination, prepare materials and to conduct some preparation stages. Mosaics making is an extremely thorough work which requires attention and patience. In the education process, we mostly work with graphic editors, that is why such classes in arts and crafts provide the priceless experience of working with tools and materials. Besides, we managed to talk with the school founders, teachers and students.

Despite the fact we were spending a lot of time in Mosaics School, we managed to visit the main sights of London: Big Ben, Tower, Trafalgar Square, Hyde Park and many other things. I would like to highlight the tour of the Barbican, which Margarita Kuleva, a researcher at the Center for Youth Studies, organized for us. The scale of the apartment complex struck me in lectures from design history, but in real life, everything appeared to be far more impressive. It was rather a city within the city, with its own cultural infrastructure. Several contemporary art galleries, theatre, concert hall, exhibition spaces are situated there. Complex’s landscape is also various: it includes an artificial pond, gardens and tropical greenhouse.

Then we found ourselves in London museum devoted to city history. The museum’s collections represent items related to the important periods of the modern capital of Britain creation. Undoubtedly we could not miss Tate Modern – British national gallery of modern art. It is situated in the former power plant building, which has fully preserved its appearance. Contemporary artists’ canvas which are on the industrial background only enhance the impression. Besides the pictures, one can see installations, created via digital technologies, or to become acquainted with performances held within the building. I was really impressed by the number of works in Tate Modern and the way they were represented. A visitor gets an opportunity not only to see some famous works of art but also to interact with them.

This study trip was an ideal end of the academic year. Undoubtedly, the broad visual experience is important for our profession and, from my perspective, such trips contribute to visual outlook development. HSE provided to us a unique opportunity, since not only we could to get acquainted with the city, but also we could participate in the process of making a project, know more about art education in London. Sure there still remained a lot of places I would like to visit, and I am convinced I will visit them in the foreseeable future. 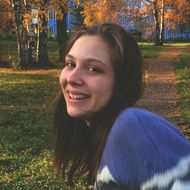 It should be said in the first turn that it was the first time I visited London and in general in the UK. A lot of things impressed me, but primary I was amazed by the architecture, city structure and some habits of residents.

On the very first day, or, to be precise, the evening of our trip, after we had landed and had checked-in, we went to the city centre of London where we saw the Tower in the twilight. After we went to the Tower Bridge where I was impressed by the scale and beauty of this architectural element which is widespread but quite unusual in this performance.

Our second day was the first day of studying at the London School of Mosaic. An employee of the school gave us a tour, told about the school history and its main activity, and showed us some works of art. After she told us about the project which we will make, showed us the process of mosaics making and tools for it.  Working on the mosaics turned out to be a very exciting and meditative process. You can relax from the hustle and bustle of the big city in your quiet workshop, but at the same time this is a kind of art where you cannot turn your head off, because you should always think about how to break a piece of tile in order it will turn out to be the right shape and eventually came to the right fragment. By the way, all the school workers were talking that they were upset because mosaics often is not considered as a kind of art. At the first day, we almost finished drawing up a pattern. It was very useful and nice at the same time when the school workers and even students passing by us made compliments to our works and helped us with their advice. After studying we continued exploring London central part, walked from Oxford to Big Ban which, in turn, was nicely covered with scaffolding for restoration, but, anyway, we could see at least its watches.

On the next day, we get acquainted with the school director David. This time an assistant teacher was Adam, and I finished creating my mosaics picture, meanwhile, other students have already managed to start making new mosaics in a new technique. After that we made, that is to say, “grounding”: we rubbed concrete over the seams between the elements of the mosaic. 10-20 minutes left before the ground solidification, so our works had been finished. I really enjoyed working on the mosaic, I would like to work in this field a little bit more since I really like painstaking work with tiny details. After thanking everyone and saying goodbye, we went for a walk in the park near the Hempstead Heath school. During the walk we enjoyed a wonderful view of a city.  After we went to Hyde Park where we started following the culture of park lunches. This is one of those features that I liked a lot, and it was a thing that let us take a break from the constant rush. It would be wonderful if the same tradition was common in Russia and people went outside to the nearest park together with their friends and colleagues.

We were looking forward to the fourth day of our trip because Margarita Kuleva, our curator on this trip, promised to organize for us a tour to the Barbican and Tate Modern. The Barbican was one of the most interesting places in London for me. Moreover, just a couple of month ago we were told about it in the history of design class, and now I could see the Barbican myself. In reality, the neighbourhood looked were significantly more beautiful and cheerful rather than in the pictures. I wanted to discover it all day, to examine every its detail, but we had a lot of things to do and did not have much time.

On the departure day, we firstly faced with a transport problem, that is why we decided to avoid risks and not to go to new places, so we simply started moving to the airport. That day got away rapidly, but Saint Petersburg met us with a beautiful sunset so that we did not feel sad for the journey ended.

I am very thankful for this trip. London seemed to be one of the most magnificent cities where I have ever been to. I hope the emotions and inspirations from this trip will give me energy for a long time. 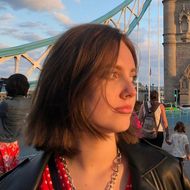 This trip to London became for me the most unforgettable adventure for the whole year. Not only we managed to see main city’s attractions, but we also managed to visit London School of Mosaic. There we got acquainted with amazing teachers as well as we made our own mosaics. For two days we had been working on our works, but it was more difficult that it could seem! After every masterclass, we went to different city’s parks to relax and soak up the sun, which is a rare phenomenon for London. London itself is an amazing city with numerous art-galleries, architecture masterpieces and other places connected with art, which must be seen with one’s own eyes. 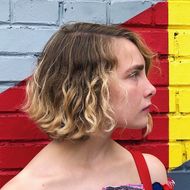 It is possible to say that this trip to London became my first trip abroad, that is why all the contrasts were increased significantly. Five days of totally new life, being in a completely new environment, among new people, in new places – everything of this gave me invaluable experience, unreal emotions and a strong desire to come back to Great Britain as soon as possible.

The most of the time our small group of students spent in London School of Mosaic studying and practising kind of art new for everyone. It is painstaking but interesting work. School teachers told us a lot about school history, show us how to work with pieces of materials and how to create patterns with them.

We visited known to everyone Tate Modern, where we spent several hours, went to the museum of London, had lunches in the parks for an uncountable number of times, which is, by the way, a common practice in the city of London.

My two groupmates and I lived in Shoreditch, this neighbourhood is considered very fashionable and it finds itself not far from the Tower. We walked there a lot and I would name Shoreditch as very creative neighbourhood, we often saw different graffiti or, what was unusual, walls and pillars fully plastered with stickers. I put a sticker of my student project on one of them.

Despite that five days is not so much for a large-scale exploration of the city, our whole trip was very eventful and full of new experiences. I firmly believe that it was not my trip to London. I really want to come back there because the city is amazing, and I feel that it is close to me somewhere on a mental level. 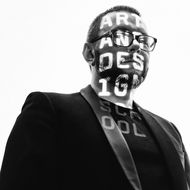