Joint Summer School of the Higher School of Economics, Faculty of History (St. Petersburg) and the University of Basel (Department of History, Chair of Russian and Eastern European History), 2012, June 3-12

Professor Frithjof Benjamin Schenk of the University Basel concludes that the summer school "St. Petersburg as the Capital of the Russian Empire" was a great success to students from the University of Basel and HSE: 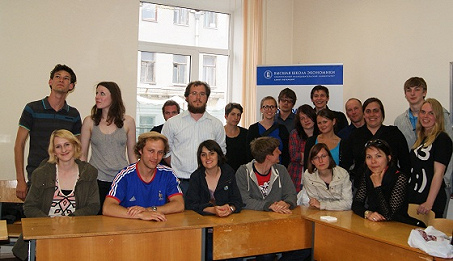 "The first joint summer school of the Higher School of Economics, Faculty of History (St. Petersburg) and the University of Basel (Department of History, Chair of Russian and Eastern European History) in June 2012 was devoted to the historical analysis of Saint Petersburg as the capital of the Russian Empire. Under the supervision of Prof. Frithjof Benjamin Schenk (Basel) and Prof. Alexander Semyonov (HSE) 22 students spent ten days in intensive discussion and doing field work in St. Petersburg. Prior to the international meeting the participants from Switzerland had successfully completed a seminar in the spring term on the history of Russia’s former capital. During the summer course each student had to make a presentation either in the classroom or at a historical site in the city. Lectures from professors of the HSE opened the opportunity to get a deep insight in current historical research and political debates in Russia. Additionally, the students visited a great number of historical sites, connected to St. Petersburg's role as metropole of the Russian Empire. Both the students from HSE and from Basel were highly satisfied with the result of this scholarly and educational endeavor. The successful cooperation of both universities will be further developed in the framework of an official partnership between the HSE and Basel University which was signed by the rectors of both institutions in December 2012".