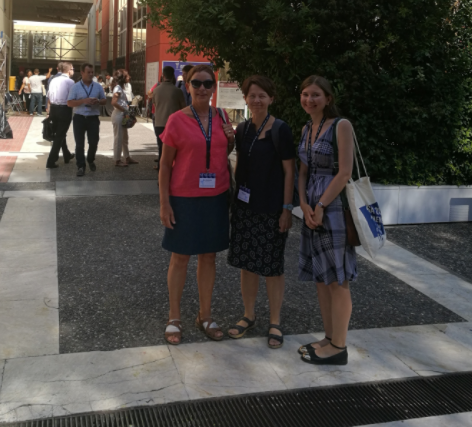 Every two years the European Sociological Association organizes a conference that attracts social scientists from all over Europe. This year the conference venue was the city of Athens/ The scientific event was focused on the processes that "create" European society. Nadezhda Vasilyeva, intern researcher at the Centre for Youth Studies, shared her impressions about the conference and narrated about how she was able to participate in this scientific event.

"The first thing to note is the size of the event. It was my first time at the conference, where 70 sections worked simulatneously! It was very difficult to choose only one, especially since there were a wide range of directions. I was pleased with the large number of studies on various youth issues and their various interpretations. For example, in my section there was an emphasis on "youth in trouble", my colleagues have described the difficulties of modern girls and boys, as well as problems of intergenerational differences. I presented a theme that differ a bit from the majority of topics. I tried to focus on how young people (namely, sticker artists) trying to change and redefine existing realities, and what kind of new forms of citizenship arising as result of such activity. My report was based on the materials of the “YOUTH IN THE DIGITAL MEDIA CITY: Urban Ethnography in the Streets and Stations of Helsinki and St. Petersburg” project, supported by the Kone Foundation.

It was very exciting to me as a novice researcher to speak on such important scientific event that brought together so many successful and interesting scientists – for instance David Harvey, speaking at the opening ceremony! I want to express my gratitude to my colleagues from the CYS who supported me all this time. Until the last minute I didn't believe that I actually will be able to participate in the conference, since the preparation procedure was very long and difficult. The abstract of the report was sent in winter, accompanied by my desire to tell the world about our sticker artists. After a couple of months when I've forgotten about my application, I received a positive response. I was very happy, until I realized that the participation in the conference is not only difficult but also expensive. In this regard, it was decided to apply for obtaining travel grant from the University. Initially I did not believe in the success of this venture, but as personal experience shows, nothing is impossible, and Science Foundation has funded my trip. Special appreciation to the employees of the Center of the science organization and academic development, consulted me on various issues very quickly and efficiently.

To sum-up, participation in such conferences is an amazing experience, inspiring and stimulating to further growth and development. I am very glad that I did it despite all the difficulties and doubts."

Elena Omelchenko and Guzel Sabirova also presented their reports at the conference. Elena Omelchenko told about the transformations of youth cultures in Russia and Guzel Sabirova on the ethnic and religious dimensions of youth cultural communities in large cities. Both reports are based on the materials of the project "Fields of positive interethnic interactions and youth cultural scenes in the Russian cities", supported by Russian Science Foundation.

Vasileva Nadezhda
About
Centre for Youth Studies
About persons