Elena Omelchenko, Guzel Sabirova and Dmitry Omelchenko went to the capital of Dagestan to carry out expert interviews and preliminary design the field phase of RSF project 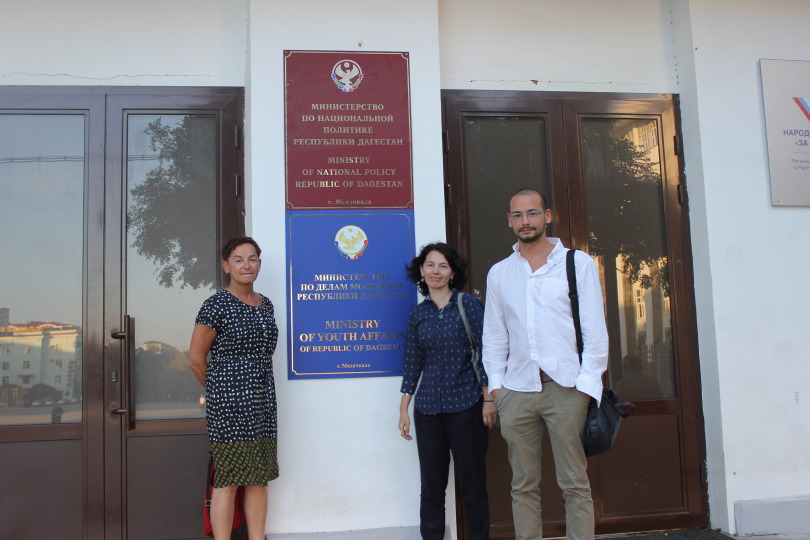 Center for Youth Studies has actively started to implement the project: "The creative field of inter-ethnic cooperation and youth cultural scene of Russian cities" supported by the Russian Science Foundation. And one of the cities where the research will be carried out is Makhachkala.

Last time our colleagues went to Dagestan 17 years ago, it is clear that information gathered on the region is clearly outdated and in order to understand the current agenda, we went to Makhachkala again to explore the city and the people.

Our first meeting was with the young religious and sports activist. The young man, Ildar, the initiator and organizer of the sports sections in Ulyanovsk, got accepted at the Dagestan Humanitarian Institute, specializing in theology and the study of Islam, tried to design the exchange area of athletes between ​​Ulyanovsk and Dagestan. Each year, the cup is held in Makhachkala named “Resalat Cup”, the main rule is to respect Islam and where any unprofessional team can participate. The Cup attracts teams from all over Dagestan and Ildar organized the visit of young footballers from Ulyanovsk, who were not Muslims in a way. According to our first responders in the modern Makhachkala - respect for religion (not just their own), respect for the elderly in recent years became the very important aspect. The region is developing and becoming a safe place to visit and relax.

Then, we met a young man Haji, who is the leader of the local KVN youth activity, as well a co-organizer of one of the two anti-cafes in the city. According to him anti-cafes became a in a hangout spaces for “advanced” youth, a positive spaces for a variety of activities: board games, lectures, workshops, rehearsal areas, stand-ups, avoiding political and religious battles.

The next day we met with the rector of the Dagestan Humanitarian Institute mentioned above, Magomed Magomedov Yusupovich, whom we spoke about the activities of the University and priorities for training. In particular, we talked about the theological concept of condemnation and prevention of religious fanaticism and destructive, radical Islamism. We covered the same agenda with the staff of the local Ministry of Youth Policy, and if young people are taught directly in the area of theology in DHI, the Ministry is working with the prevention of extremism in the secular form of education and assistance to young people.

We visited the local club of youth initiatives - "I am assistant to the president". The organization works with the different youth that has a positive vision and willing to participate in social and cultural life of the region. One of the projects carried out by the union today, is to fight the illicit drug traffic. It is a serious problem in the region today because of the availability of "spice" and "lirika" substances, the sale is usually carried out in public pharmacies.

On the last day we met the representatives of the informal stage in Makhachkala, the guys from the rock band and a local DJ who knows the entire musical culture from the inside. In addition,we held a short but very interesting conversations with taxi drivers, store employees, local social scientists, ordinary people who live permanently in the city.

To sum it up, the trip can be described as a very positive experience to become familiar with difficult areas and positive developments in the region. Certainly, we still have a lot to understand and evaluate, but the main vectors can be already seen. Of course, the vast majority of young people in the town is very religious and that we have to take into account. Secondly, it is the presence of small grievance against Russia and Russians for all the stereotypes, in particular, that the region is considered a foreign country, that the image of the Dagestani formed on the basis of two or three unsuccessful examples, which central media are focusing around. Third, the usual life of Makhachkala is trended with multiple relevant international discourses, but each finds its local flavor.

Topics
Research&Expertise
About
Centre for Youth Studies
About persons