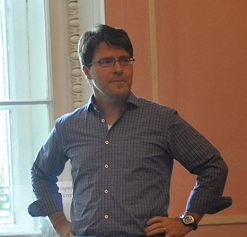 Kenneth Pinnow: «Because of the Cold War, American understandings and perceptions of Russia and its people have been greatly distorted».

-Why do you think it is important to organize summer schools like this?

-Given the globalized economy and culture, I think it is vital that we have summer schools like this one, which give students a unique opportunity to leave their familiar worlds and encounter different people and cultures. These opportunities promote understanding between people and may also help students to see themselves differently. Thus, I think these summer programs are important for promoting global understanding and individual growth.

-What is the main achievement of the summer school?

-I think the summer school succeeded in at least two main ways: a) it fostered personal relationships between the American and Russian students, which I hope will continue in the future; and b) helped the American students to develop a better and more nuanced understanding of Russian history, politics, and culture.

-Why do you think it is important for American students to know Russian history and understand Russian culture?

-Because of the Cold War, American understandings and perceptions of Russia and its people have been greatly distorted. This continues to be the case, although a little less so since 1991. Knowledge of Russian history and culture will help these students to develop their own perceptions and to assess more critically what they learn through movies, newspapers, and other sources. My hope is that by sharing their experiences with friends and family, they will further help to change misunderstandings about Russia in the USA. Finally, I just think it's good for them to know more about Russia given the richness of its history and culture.

-How can American students apply the knowledge that they got during the summer school?

-Some students may apply their knowledge directly in the classroom, when they take classes on history and politics (even if these are not specifically about Russia or the former Soviet Union). Others may implement what they've learned in a less direct and more "quiet" manner because they have become more open-minded and more aware of differences between cultures, peoples, and nations. For example, I can see some students traveling abroad more after this program or being more likely to expose themselves to different foods and cultures. The summer school in these cases will have helped them to learn how to perceive and understand difference in a positive rather than negative way.

-What is the difference about the teaching style and the atmosphere in the classroom in the US and Russia?

-My sense is that the classroom in America tends to be more informal (although I think this is changing in Russia). There is less emphasis on lecture, memorization, and repetition in the United States than in Russia. American students are encouraged to speak up, ask questions, think creatively, and take responsibility for what they are learning in the classroom. In many respects, they are encouraged to question the professor, who is perhaps less authoritative a figure at our universities than in Russian universities.

-What is your personal impressions of the summer school and the trip in general?

-This is my first time leading a group of students from different universities and a program that visited two countries in order to promote comparison. I think it was ambitious and generally very successful. To me, one of the primary strengths and successes of the program was the bringing together of the American and Russian students in St. Petersburg. Although the American students learned much from the lectures and excursions, I believe that they learned even more about Russia from the interactions with their Russian peers. The relationships that they formed will, I hope, continue in the future, meaning that our students will continue to learn and benefit from the program even after its conclusion.