A Usable Past: Applied and Interdisciplinary History

On 28-29 March 2014, the international conference "A Usable Past: Applied and Interdisciplinary History” took place the Faculty of History and National Research at the University Higher School of Economics – St. Petersburg campus.About forty historians from universities across Russia – including  St. Petersburg, Moscow, Volgograd, Chelyabinsk, Petrozavodsk and Arkhangelsk – joined with colleagues from Sweden, Norway, the UK, Ireland, Portugal, Italy, France and Hungary.

The goal of the conference was to present a diverse set of directions in applied and interdisciplinary historical research and exchange views on the status and future trends in applied and public history.The conference provided a venue for discussion what we, as professional historians, mean when using the terms applied and public history, and how we see their role in the profession and in society. These aims areclosely connected with the strategy of the Faculty, which is currently working to establish a new international MA programme in applied and interdisciplinary history to be opened in 2015.


The conference was opened by a Dean of the Faculty, Professor Alexander Semyonov, and the organizer of the conference, co-chair of the future MA Programme, Associate Professor and Senior Researcher Julia Lajus. Presentations were grouped in 5 sessions and 3 roundtables. This format allowed a larger number of researchers to participate in the conference, which was especially advantageous for PhD students and young researchers who were able to present their work-in-progress during short round-table presentations.

The first day of the conference was devoted to issues of interdisciplinarity in historical research, discussed during a session on “Applied History: Development Studies, Economics and Industrial Heritage,” and a panel on “History and Law.” At the first session, the current status of economic history and its possible use in the framework of applied history, the history of development studies, and a case study of a Soviet nuclear heritage site in Lithuania were discussed.  At the second session, legal historians and legal practitioners discussed the possible intersections in research and the influence of legal history on current politics in the legal sphere.

The plenary lecture,“The Need for History – How History Speaks to the Future,” given by Poul Holm, professor from Trinity College, Dublin, emphasized that “historical research enable us not only to criticize the world but to help create a better one.”In the lecture, Holm argued in favour of interdisciplinary research, citing the opinion of the great philosopher Karl Popper: “We are not students of some subject matter, but students of problems. And problems may cut right across the borders of any subject matter or discipline.”Examplesthat illustrated the fruitfulness of interdisciplinary research were provided from the field of environmental history. Poul Holm also argued for the active inclusion of historians into global interdisciplinary programmes like Future Earth, 2013 – 2023. The overarching challenge in moving into that direction, however, revolves around the issue of creating radically interdisciplinary research environments. 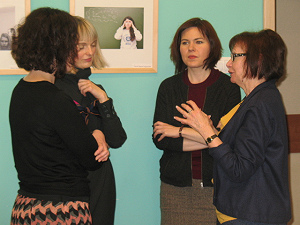 Further, Holm argued that history provides us with knowledge of human interactions, interpretations, and the critically valuable benefit of a comparative perspective. In order to be ‘usable,’ the past needs to be understood as comparable. The work of historians leads to the creation of baselines and values in the society, which in turn guide the actions in society.  Thus, Holm emphasized the central role of knowledge and experts in the process of creating a useable past, stating that research in the humanities must be committed to truth-finding like any other scientific inquiry. But the complexity of the humanities, including history, lies in the fact that the tool of inquiry – language – is culturally laden. Holm’s lecture underscored how the practices of knowledge translation – from comprehension to communication to implementation – impact not only the academic community but the public. The key issue is who will implement historical knowledge and how – do we know ‘right’ modes of its implementation? Or in other words “what motivates us as humans and how may we govern ourselves?”

One of the most important questions for historians, according to Holm, is the question of how humans have shaped the physical environment throughout history by means of technology and culture, including architecture and the development of diverse infrastructure. This question was also discussed during the round-table “Interdisciplinary History: Technology, Architecture, Environment,” which used examples from the history of technology, design, the management of architectural heritage, and environmental history. 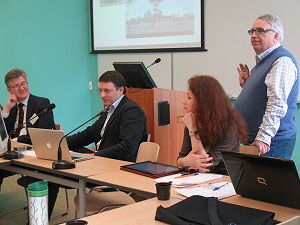 The second day of the conference was devoted to public history. It was opened by a plenary lecture “Professional Practices of Historians outside the Academy” by Irina Savelieva, professor of the Faculty of History at HSE Moscow and a Director of the Poletayev Institute for Theoretical and Historical Studies in the Humanities. Savelieva provided a comprehensive overview of public history and what strategies and practices historians have applied to become public historians. The lecture emphasized that public historians do not only work with the public as a target audience, but in a dialogue with the public as a partner in historical research. Thus, public history needs to be distinguished from popular history, which does not involve the public in historical research but only presents their results in popular forms. One of the questions which was risen in the lecture was: “Is public history a separate historical discipline?” Professor Savelieva argued that it is not a discipline but a set of practices which historians use when presenting their findings to the public and in creating new knowledge together with the public.  During the discussion, the conference participants agreed with Savelieva’s views regarding public history, especially the role that professional historians play in putting questions to a public that often thinks it knows its own history. Public history should pay careful attention to local understandings of history and should not be supercilious when the public acts according to the idea that “every man is his own historian.”

After the plenary lecture, the session “Public History and Historical Memory on the European Periphery,” moved the discussion to the influence of the memory of traumatic events on current politics, drawing on examples from Ireland, Hungary, Macedonia and Belarus. Subsequently, the session “Public History and Historical Memory, Russian / Soviet” examined the general problems of memory, as well as examples of city-branding and the construction of museum exhibitions. The participants of the panels emphasized that the concept of ‘usable past’ is itself quite ambivalent, arguing that we need to pay more attention not only to the product that is constructed and offered for public use by historians, but also to the agencies and actors who construct this product and the processes of its dissemination. Because different agents construct different pasts, one of the results of the discussion was the notion that it is better to use a plural form – ‘usable pasts.’

During the second round-table, “Public History, Politics, Culture and Media,” the presenters and audience discussed the use of historical images in art, culture and mass-media. The dialogue stressed that the use of history in these spheres is not at all a new phenomenon, but it has increased in scale and gained new meanings with the development of the Internet and the digitalization of knowledge.  The discussion cited the example of the circulation of images of the British Empire in BBC-created media space, the use of the past in contemporary popular music, images of members of the 1825 Decembrist revolt in Soviet cinema, and the image of Russian folk personage Dobrynya Nikitich in animation and monumental sculpture, among others. 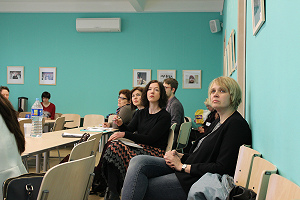 The conference ended with a roundtable on teaching applied and public history, where participants shared their experience and offered some useful advice in connection with our new MA programme, which was briefly presented by Julia Lajus.

The conference proved to be a very exciting and fruitful exercise. More questions arose than answers were provided – thus we very much hope to continue discussions and collaboration with all the participants, toward the creation of long-lasting professional ties.

“A Usable Past: Applied and Interdisciplinary History”

Marina Kurkchiyan (Oxford University) “Tracing the past to the present: an application of the comparative approach to the study of socio-legal traditions”

Alexandra Bekasova (European University at St. Petersburg and Higher School of Economics) “Techno-tales of progressive change and "a usable past": what "useful" to say have historians of technology about the past in relation to the present and future of mobility?”

Anastasia Fedotova(Institute for the History of Science and Technology RAS) “Trade of grain, pests, and crop failures (the history of applied entomology as the junction of history of science, history of agronomy, and environmental history)”

Catriona Kennedy (University of York) “The political uses of the past in Ireland: The bicentenary of the 1798 rebellion”

Evgenii Koloskov (Saint-Petersburg State Agrarian University) “Longing for the South: Discourse of the lost legacy in the international relationships of South Slavic countries”

Julia Khmelevskaya  (South Ural State University, Chelyabinsk)  “A usable past, the lessons of history and venues of future: Some critical notes”

Zarina Gatina (National Research University Higher School of Economics) “The transformation of the professional historian into the public historian: The attempts of self-reflection”

Dunja Dogo   (University of Siena) “Creating a cultural memory: Images of Decembrists and populists in Russian and Soviet historical feature-films (1917-1932)”

Nikolai Petrov (St. Petersburg Metochion of the Convent of Saints Constantine and Helena) “The veneration of St. Nicholas in Russia during the 11th-14th centuries”

Ilya Guryanov (National Research University Higher School of Economics) “Constructing the origins of modern republicanism: The concept of “civic humanism” as a usable past”