The workshop сalls for papers interested in charting the everyday workings of late-Soviet state institutions. We hail from a basecamp of a major research project on this theme that we have just started at the HSE. Workshop keynote addresses: Alexei Yurchak (Berkeley) and Sergei Abashin (European Universit, St Petersburg); conference organiser: Nikolai Ssorin-Chaikov (HSE St Petersburg). 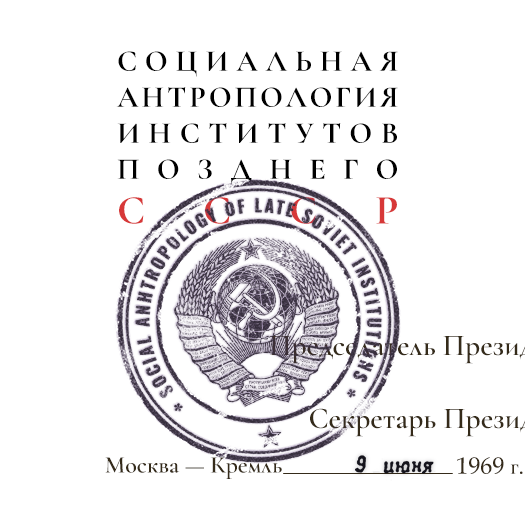 The state is not the reality which stands behind the mask of political practice. It is itself the mask which prevents our seeing political practice as it is. There is a state-system: a palpable nexus of practice and institutional structure centred in government and more or less extensive, unified and dominant in any given society. There is, too, a state-idea, projected, purveyed and variously believed in in different societies at different times. We are only making difficulties for ourselves in supposing that we have also to study the state - an entity, agent, function or relation over and above the state-system and the state-idea. The state comes into being as a structuration within political practice; it starts its life as an implicit construct; it is then reified - as the res publica, the public reification, no less - and acquires an overt symbolic identity progressively divorced from practice as an illusory account of practice.

Philip Abrams has been seminal for outlining what is now a flourishing field of ethnographies of the state. Yet, if these insights have been instrumental in generating research into the ‘imagined state’ (Gupta 1995) — what Abrams described as the reified life of the state-idea — they have ironically been much less conducive to institutional ethnography. There is important work which details the circulation of the state ‘as if’ an entity or agent beyond state institutions, including its disciplinary and subject-making effects (Navaro-Yashin 2002; Ssorin-Chaikov 2003; Reeves 2014). But this work by and large overlooks what happens within the institutions themselves. If it has been recently re-energised by the analytics of sovereignty (Hansen and Stepputat 2005; Bryant and Reeves 2021) it energy has been more effective in the nexus of subject/citizen/refugee/outcast, etc., rather than in the ‘palpable nexus of [institutional] practice and structure’ (Abrams). Paradoxically, while the anthropology of the state has been recently advanced by research into everyday life and materiality of documents within state institutions (Messick 1996; Riles 2006; Hull 2012; Reeves 2013; Mathur 2016), it stops short of generating its own institutional analysis thus effectively relegating it to institutional economics and political science.

The Anthropology of the State

The proposed workshop aims at addressing this asymmetry. We call for papers that will do so from a particular local and temporal vantage point: we are interested in charting the workings of late-Soviet institutions. The workshop hails from a basecamp of a major research project ‘The social anthropology of the late-Soviet institutions’ that we have just started at the HSE. Its aim is to fill the gap in the historiography of Soviet and Soviet-type societies which s contours very much, if surprisingly, resemble those just outlined for the anthropology of the state more generally.

Everyone agrees that the state plays the key role in the organisation of Soviet order but there is precious little actually done on state institutions (including communist party institutions), and particularly on the late-Soviet period. Exceptions that prove the rule include Humphrey (1984), Ssorin-Chaikov (2003 and 2016), and Abashin (2015) on collective farms; or Mitrokhin (2021) on complex symbioses of collaboration and competition between the party apparatus and union industrial ministries, between headquarters and their subordinate enterprises, between all-union and republican departments. Important research has been done on knowledge production, including economic mathematics and cybernetics (Leeds 2016 Kirtchik and Gouarné 2021) and on late-Soviet subjectivity (following Yurchak 2006). Yet this seems to reveal a conceptual reification effect of the state that is akin to what Abrams critiques. In effect it has pushed research to knowledge rather than power in the knowledge/power nexus, and to citizen/subject at the expense of the institutional locations and practices (but see Verdery 2014; 2018). Institutional micro-histories, ethnographies and historical sociologies thus remain unexplored systematically despite (or perhaps indeed because) bureaucracy, red tape, overregulation and secrecy have been a cliche that is inseparable from the image of late socialism, if not all Soviet order. There are assumptions about institutional structure and practices that implicitly underpin the analyses of Soviet subjectivities, materialities, economies, science and knowledge, and ideological hegemonies. But these assumptions remain taken for granted, rather than being explicitly addressed and examined.

Soviet order comprised (and ‘saw itself’ in the sense of Scott [1998]) through different collective organisations — perhaps even ‘modes of existence’ or ‘collectives’ in the usage of Latour (2013). These were various establishments, factories, work collectives, kolkhoz brigades, housing cooperatives, counsalary and party cells, construction bureaus, amateur hobby ‘circles’, etc. Yet all these have been integrated into a complex institutional system of state socialism. They were interconnected, and constituted through, formal and informal admin and governance procedures, which may be called ‘grammars of state socialism’ (to paraphrase

Samanani, Fedirko, and Williamson 2021) with dependent and independent clauses, as in complex sentences, and various organisational orders. Tellingly, this system has never been systematically examined — neither from the classic Durkheimian or Parsonian sociology of social institutions nor from to those of theories if institutional isomorphism (DiMaggio and Powell 1983) and organisations, from Weber’s theories of bureaucracy to the ANT. The pertinent questions such as ‘how institutions think’ (Douglas 1986) or how the states writes (Messick 1996), have hardly been asked for state socialism. What might happen just if these conceptual discourses are applied and these questions asked?

We call for papers that follow these three points of conceptual entry and focus on institutional practices that cover this significant research gap. Paper topics might include:

Successful paper proposals will provide critical assessment of the dominant analytics of late-Socialism from the institutional point of view. The critical engagement might include approaches that :