Women's Football: a Dream and Stereotypes

Maria Nedosekova on how she wanted to become a football player and challenged gender stereotypes. 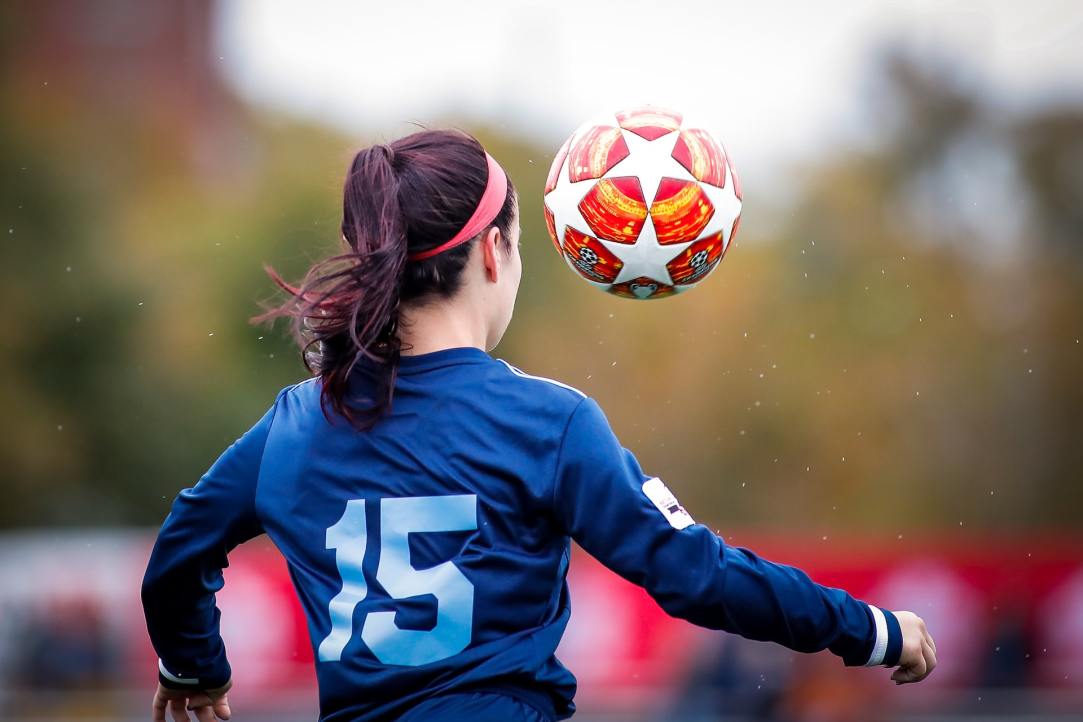 Photo by Rhett Lewis on Unsplash

Football - how much excitement, speed, struggle, and aspirations are in this game. How much desire to win! But do you really think that only men want to play this game? No, girls all over the world are ready to confirm this. This summer the European Women's Football Championship was held in England, and the host team defeated the German team in the final match and win the Cup for the first time in its history.

This sporting event, girls’ struggle, and passion gathered a record audience for women's football - the final at London Wembley was watched by almost 90 thousand spectators, and the number of television broadcast viewers exceeded 3 million people. But women's football has not always been so popular even in Great Britain.

I fell in love with football in 2006 after watching the World Cup final between France and Italy. The exact farewell match of Zinedine Zidane, where the final chord of his career was the beat of Materazzi and the insulting defeat of his team on penalties. It was the moment when I realized that football is not just a game. Since then, I started playing in the yard with the neighborhood boys (and did it quite well).

One of these guys started training professionally and his level of play became noticeably higher. Of course, after that, I also expressed a desire to join the team and play with a real coach - this is where all the fun and problems begin.

My dreams collided with a harsh reality in the form of gender stereotypes from my parents in the Russian outback. They were absolutely sure that football is a purely boyish game, that girls football players will certainly grow up to be masculine lesbians, and that my childish fun will soon pass and I will start doing “normal stuff”. At the same time, the question arose in me: “Why do adults think this way?” I’m quite an ordinary girl, of an ordinary build, and sometimes I wear skirts. Years passed, and my interest in football did not fade away, but the dream of a professional career, of course, collapsed.

Later, I entered the Higher School of Economics, and here my football life really began. I was wondering: why football is considered a really cool sport for girls in some countries, while in others it is discriminated against or hushed up.

This article will tell about the path of European football players, discrimination, and the revival of women's football, as well as how gender stereotypes influenced this sport in Russia and what opportunities girls football players have today, including at the Higher School of Economics.

“The future of football is women,” said the president of the International Football Federation (FIFA), Joseph Blatter, after the end of the World Cup back in 1995. After 25 years, women's football is really starting to gain popularity around the world. In 2019, FIFA allocated $1 billion for the development of this sport in different countries, which confirms the interest of officials in popularizing the game.

The history of women's football is not as straightforward as it might seem at first glance: the game was actively gaining momentum during the First World War (matches between women's teams gathered up to 50 thousand spectators), however, after it ended in 1921, the English Football Federation decided to impose a ban on holding football matches between girls. The official reason was the doctors' statement that it is a contact and aggressive sport, often accompanied by injuries that negatively affect women's reproductive health, but the real reason was probably hidden elsewhere - matches between women’s teams began to attract more viewers, than men's.

Women's professional football was illegal in Germany and many other European countries until 1970, when the raging second wave of feminism swept the West. Despite the legal change in the status of the game, breaking the long-held popular notion that female football players are unacceptable has proven far more difficult than lifting the ban.

In the Soviet Union, women's football was also not a priority until this sport was included in the Olympic program. It was not profitable for officials to develop something where it was impossible to prove the political superiority of communism over capitalism.

In 2019, the Russian Football Union adopted the first comprehensive program aimed at the development of women's football in the country in several key areas: work on opening women's academies, attracting girls to sports in different cities, training qualified coaches, developing infrastructure - in the end, all these means should lead to the popularization of football in Russia. The RFU also took control of several media where women's football can reach a wide audience. Since 2021 the club matches are broadcast on several cable and digital platforms at once: Tricolor, VK, and the RFU women's football website. All key matches of the national team can be watched on the main sports channel in Russia - Match TV.

The promotion of women's football is one of the few remaining ways to expand the market - while men's football has long been famous for multimillion-dollar contracts at various levels, women's sports are at the beginning of this path, which is an important factor for companies wishing to start cooperation with women's teams.

The history of women's football

It began at the end of the 19th century in England - the first official match was played in 1895 between the teams of the London North and South, ending with a score of 7: 1.

In 1917, the team Dick, Kerr Ladies F.C. was created - it consisted of the workers from the eponymous factory. Their charity match against St Helen's Ladies on Christmas Day 1920 attracted 53,000 spectators at Liverpool's famous Goodison Park (now Everton's home arena). On that day, the girls were able to earn about 3,000 pounds (by today's standards, $ 200,000) - they transferred the money they received to organizations that support the families of soldiers who suffered in the First World War.

However, on December 5, 1921, sports officials decided to ban professional women's football - the official reason was a medical opinion about the dangers of active ball games for the reproductive health of girls and suspicion of corruption, but the real reason was hidden elsewhere.

After the end of the war, women's football was so popular that men's matches were nowhere near able to gather an audience of this size. We can safely say that the reason for the ban was the strict gender rules of that time: this example serves as a useful reminder that despite the sharp appearance of women in the sports field during the war years, they could never completely go beyond the generally accepted idea of ​​​​the place of the “weaker sex” in society. Girls in sports have always been in secondary roles, and all attention was given to men.

Women's football in Russia - the history of formation

One of the first official matches between women's teams in Russia happened during the reign of Nicholas II. On August 3, 1991, the first match between Pushkino and the Petrovsky-Razumovskaya took place, ending with a score of 5:1. However, after several matches, women's football in Tsarist Russia actually ceased to exist at the official level.

In the USSR, nominally enshrined gender equality was supposed to contribute to the development of women's football, however, this did not happen. This sport was not part of the program of the Olympic Games for a long time (until 1996), respectively - the authorities of the Soviets could not use women's football as a political lever to demonstrate the superiority of communism over the capitalist world. In Soviet culture, football was strongly associated with the male sphere, and the figure of the goalkeeper was sacred in culture - he was often compared with the defender of the Motherland.

However, women's football in the USSR existed even without the help of the state. A high concentration of amateur teams was in Ukraine. In 1972, Dnepropetrovsk even hosted the Valentina Tereshkova Cup, in which, in addition to natives of the Dnieper, football players from other Ukrainian cities, Moscow and Riga took part. Women's competitions at the stadium "Torpedo" caused a huge stir. The arena for 10,000 spectators at the match between local Dnipro and Meteor was packed.

But after the game, one of the Azovcable workers sent a letter complaining about women's football to the medical journal Zdorovye with the headline “Woman on the football field? It's unnatural!" - the man did not like the appearance of the football players, and he was also worried that due to the loads, falls and the ball hitting the lower abdomen, the athletes would not be able to have children.

As a result, a month later, in 1972, the USSR State Committee for Sports and Physical Education banned women's football and a number of other sports, including boxing, as they are harmful to women's health.

Until the mid-eighties, women's football in Russia was represented only at the amateur level - it was played by students and factory workers. Everything changed in 1987 when the USSR national team was created - at first, the backbone of the team was formed by athletes from other sports: field hockey and athletics.

And what about professional football in Russia now?

At the moment, the RFU is implementing a program to develop women's football in the country - this implies not only high-quality coverage of the Russian Super League but also attracting girls to sports in different regions of the country. The Superleague is developing - this is noticeable not only by the increase in the number of teams (there are already 10 of them, including such giants as CSKA, Lokomotiv, and Zenit) but also in terms of attendance and television ratings - at the moment, the broadcast figures are comparable to the FNL (the second-ranked men's league in Russia).

In collaboration with UEFA, the Russian Football Union is implementing the Playmakers program so that girls all over Russia can plunge into the world of football together with familiar Disney cartoon characters. The Football at School project was also launched, under which all students of partner schools can take part in training in physical education classes, including girls. Work is underway to popularize mass women's football in different regions.

There are many women's amateur football leagues in Moscow, the largest of which is the F-League, which takes place throughout Russia. This format is slightly different from the professional one since most often the team plays 7 or 8 people on smaller fields. There is also a student futsal league with several difficulty levels.

The Higher School of Economics provides a huge number of opportunities for its students, including sports - so do not be surprised that there is the HSE university team for girls in futsal and beach soccer. Futsal training sessions are held from September to May at the Dynamo Arena; beach football - in May at the USSR Beach Sports Center in the city of Khimki.

The university team is not famous for grandiose achievements, however, this is a great opportunity for every girl to plunge into the world of football, try something new, find a new women's team, and, finally, fulfill her childhood dream of playing football.