On January 18, 2019, the round table “Economic Cooperation between CMEA Countries: Motives, Resources and Challenges of the Cold War” was held at the Laboratory of Environmental and Technological History of the Center for Historical Research and was dedicated to the history of integration and cooperation of CMEA countries. 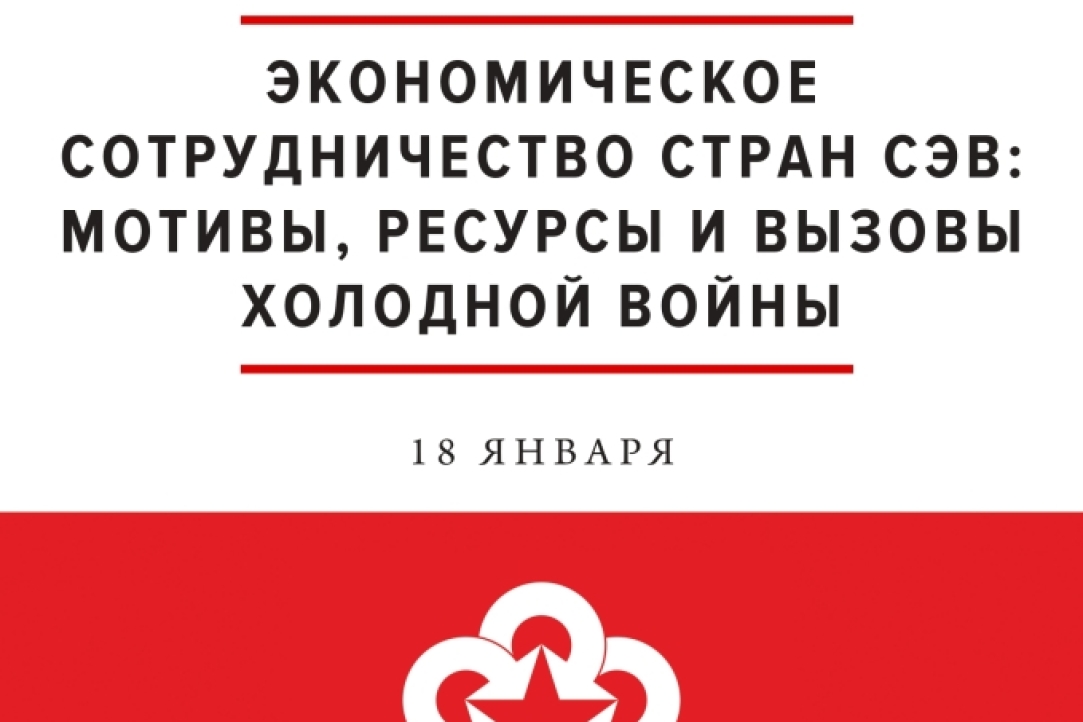 During the event, reports were presented focusing on the economic cooperation between socialist countries during the Cold War. The event was opened by Mikhail Lipkin (IVI RAS, MGIMO). The historian presented a lecture on the topic “Council for Mutual Economic Assistance: Historical Experience of an Alternative Global World Order (1949-1979),” which was devoted to the basic premises and goals of creating CMEA and the problems of the early stage of its existence.

Next, the round table was divided into 4 thematic parts: political challenges, CMEA and the challenges of international cooperation, CMEA economic challenges, technology and industrial production in the CMEA countries.

The first section was submitted by Alexander Fokin (ChelSU, Tyumen State University). His report “Late Soviet International: The Political Language of Socialist Integration” was devoted to the formation of a new organization based on the idea of mutual assistance of states within the socialist camp. Against the backdrop of the confrontation with the West, it was important to emphasize the voluntariness of their entry and their national self-determination, which was formed as a result of separate historical development. Thus, the main idea was to preserve the national sovereignty of countries and their public administrations, which subsequently should lead to a transition from mutual assistance to another stage of the organization's development - integration.

Next, the effectiveness of international cooperation between the countries in the 1960s and 1980s was assessed by analyzing the various economic ties at the regional level. This was presented by Kirill Boldovsky (St. Petersburg State University) in his report “Relations with the social countries at the regional level: political expediency or economic benefit?” Programs of cooperation with the socialist countries and their cities were developed during the indicated period. This cooperation was presented in the field of culture, education and science, public organizations, etc. The author pays special attention to the insufficient development of inter-regional ties of CMEA in various areas of the economy, the causes and consequences of this lag.

Aleksandar Odvic (University of Belgrade) concluded the first section with the study “Politics Behind the Facade of the Economy: Yugoslavia - Associate Member of CMEA (1964-1991)”. The scientist tells the story of the relationship between the countries of the Eastern Bloc and Yugoslavia, which are built based on bilateral relations that are beneficial for both sides. The uniqueness of this case lies in Yugoslavia’s freedom of action of in the field of economy and trade. However, after the conflict with Czechoslovakia in 1968, the USSR was forced to limit cooperation within the CMEA framework with Yugoslavia, fearing economic dependence.

In the second part, Alexei Popov (ChelSU) made a presentation entitled “1980 Olympic challenge as a stress test of socialist integration in the context of the exacerbation of the Cold War.” This study illustrates cooperation with the countries of the socialist and capitalist blocs through the framework of the Olympiad-80. The main areas included tourist trips (cultural exchange and economic exchange) and equipment imports (material and technical exchange). In general, the findings of the study show the mutual assistance system of the countries of the socialist camp failed, since only 14 of the official suppliers were from the socialist countries and 86 from the capitalist countries.

The following report, “Relations of the Eastern Bloc Countries with India during the Cold War,” was presented by Severyan Dyakonov (Geneva Institute of International Relations and Development). This work’s uniqueness lies in its coverage about the topic of relations between the countries of the socialist bloc and third world countries in the framework of CMEA. The researcher concludes that when choosing a partner country for the USSR, the key factor was a commitment to ideology, not economic gain. An attempt was also made to integrate India into the CMEA: The Soviet leadership believed that by building factories in India to expand the working class, it could lead to reforms and the establishment of a socialist regime.

The third section was introduced by Alexey Popov’s (CSU) report “’This building is based on coal and steel’: economic challenges and cooperation of European countries in the 1950s and 1960s ” and Roman Yarmoshevich’s (RANEPA) “Economic containment as a factor of technological lag in the electric power industry of the CMEA countries.” The report of colleagues from RANEPA was interesting because the author offers an analysis of the Mir electrical system from the point of view of its creation, operation and management. Electrification of the industrial production of the CMEA countries was extremely low, so the creation of a new energy system was supposed to ensure interstate power flow, establish rational use of power plants and promote the development of industry in the CMEA countries. At the end of his report, the researcher calls into question the need to create the Mir electrical system, along with the effectiveness of its work, since the prerequisites for the creation were more political than economic.

In the concluding section, Elena Kochetkova (HSE St. Petersburg, ChelSU) made a presentation entitled “Scientific and Technical Cooperation of the CMEA Countries: Networks, Transfers and Interests”. The author considered the issue of scientific and technical cooperation between the CMEA countries for their interaction. Technologies were important for the unification of countries, and experts effectively established these relations, which played a key role in the integration process. This cooperation was supposed to help technological growth and close the gap between the West for a single country and for the entire bloc. But it also testified to the fact that although the USSR had claims to political dominance, in several technological areas the socialist countries were less developed.

The round table was concluded by a report by Aleksey Sobisevich (WIET) titled “Environmental studies under the CMEA program: «model areas» and the development of an assessment of the environmental impact of the industry of socialist countries”. The report examined the interaction of Soviet and American scientists in the context of CMEA by the example of the development of nature reserves («model areas»).

The participants made the following conclusions according to the results of the round table: the topic of cooperation between the third world countries and social countries within the CMEA framework has not been sufficiently studied in historiography, more attention should be paid to the CMEA actors (specific states, organizations, individuals), as well as the relations that they formed in the result of their activities. To better elaborate, the cooperation between the HSE St. Petersburg and the roundtable partners was confirmed and future projects were outlined.

Date
16 January  2020
About
Laboratory for Environmental and Technological History