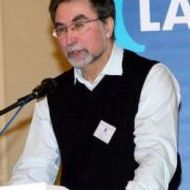 Department Head – Nikolai A. Shirokov
About the Department

The Department of Mathematics fits naturally into the structure of the School of Physics, Mathematics, and Computer Science as it supports and develops the tradition of the latest in providing fundamental aspects of learning and academic research. The aim of the department is to provide teaching in mathematics for all specializations at HSE to the highest international standards and the development of fundamental and applied research in mathematics, its applications, tools and methods.

Tatyana A. Alexeeva, Nikolay A. Shirokov.

Delhi — Capital of the Indo-Russian Conference

In mid January, Professor Yakov Nikitin of the Department of Mathematics and Business Informatics went to a conference in India. We asked him to tell us about the trip.

— Professor Nikitin, tell us about the conference.

— I spent five days in Delhi at the Indo-Russian Conference on Probability and Statistics. There were nine of us in the delegation from St Petersburg, mainly academics from SPbU and the Petersburg section of the Mathematics Institute RAS. The Indian Statistical Institute, (which was founded in 1931 by the extraordinary statistician Mahalonobis, a foreign member of RAS) organised the conference. It has campuses in Calcutta, Bangalore, Delhi and Chennai. The conference was well run and the indian participants gave high quality papers on very varied subjects. You can get an idea of it from the conference website. The weather was fine for Europeans - 12-16 degrees. The conference might become a tradition and the participants could gather again in St Petersburg in summer next year.

— What kind of research are our Indian colleagues interested in?

— Several hundred people work at the Indian Statistical Institute, carrying out research in most current areas of Probability Theory and mathematical statistics. They also work with a variety of applications of statistical methods in economics, sociology, biology, physics, linguistics and other areas.

— Professor Nikitin, what are your impressions of the country, after all, it’s another culture, vastly different from our own...

— Delhi - the capital - is a huge overcrowded city where palaces overlook slums, elephants and cows walk in the streets, monkeys and chipmunks scamper about and many many poor people try to scrape a living as street traders. Education is a high standard among young people, information technology is spreading rapidly and you can feel that they country on the rise. We were taken to see some of the sights and ancient monuments of Delhi. The highlight of the conference was the trip to Agra (200 km from Delhi) the capital of the Moghul empire where we went to see the Red Fort (a 17th century fortified palace built of red sandstone) and the famous Taj Mahal, a 75 m high white marble mausoleum build in the same period by Shah Jehan in memory of his beloved wife. It is an impressive architectural and artistic monument but I wouldn’t include it in the ‘Seven Wonders of the World’.