Head of the working group 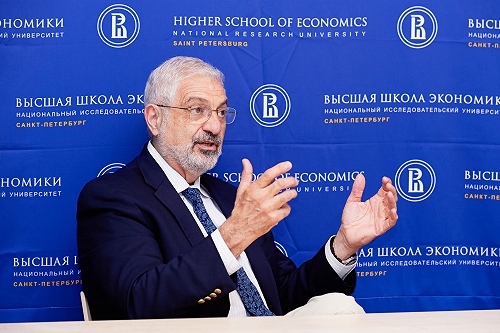 In 2014 the working group of the Department of History of Higher School of Economics in St. Petersburg won the university competition and received institutional support for the international research project “Comparative Historical Studies of Empire and Nationalism.” The project is dedicated to critical rethinking concepts of ethnicity, nationalism, nation-state, and empire in the region of Eastern Europe and Eurasia and exploring in comparative dimension the break up of historic empires and imperial legacy as constitutive for the formation of post-imperial political order, including nationalization and federalization of political space.

Then I went to the University of Michigan and I became a professor of Armenian history and wrote a book Looking Toward Ararat: Armenia in Modern History. That book was attacked by Armenians because it was not nationalist enough (laughs). So they never liked this book at all. Again it was a constructivist account of making a national identity. It was in account of how the Armenians became a nation in modern times, how they turned from an ethno-religious community based in a church to more secular idea of nation first in the Russian Empire in the Caucasus and then also in the Ottoman Empire.

Then I thought I want to move more into the Soviet history. So I began to do research on Stalin. I think Stalin is an interesting connector, an underexplored link between a local history of the Caucasus, Georgia, and Russian history and Soviet history. I began to work on a biography of young Stalin, Stalin in Georgia. But at that time, in the late 1980s – early 1990s the Soviet Union was falling apart and archives were closed. So even though I had written 200 pages I decided to put this book aside and to wait till archives open. So I didn’t continue that book. I went on to write a history of the Soviet Union. It is called The Soviet Experiment: Russia, the USSR, and the Successor States, and I developed an account of the whole history of the Soviet Union. That is now the best selling text-book of the Soviet history in the United States and maybe in all of the west, I don’t know. So that book very well pays my local taxes twice a year (laughs).

In the meantime while the Soviet Union was collapsing in 1990-1991 I gave lectures at Stanford University on how nations are made in modern times through the lens of the constructivist approach. I called it The Revenge of the Past: Nationalism, Revolution, and the Collapse of the Soviet Union. That book is kind of radical contribution, which in some ways, I’ll be proud to say, changed dominant paradigm of the way people understand nation-making in the Soviet Union. So before this book most of the writing about non-Russian peoples in the Soviet Union was based on primordial understanding of nationalities (nationalities, because I never use the word minorities, because they are not minorities in their own countries). I showed how the Soviet Union took ethnic, religious, and linguistic communities and turned them into modern nation with territories, with operahouses, with film studios, and the whole range of attributes of modern nations.

A year after I wrote that book and month after I published it the Soviet Union dissolved into 15 different independent countries. Only then I became interested in the ideas of empire and nationalism. I was interested in seeing the way in which empire helps to manufacture nations within its composite space. So the dominant paradigm about empires held that they were enemies of nations, nations grew up and destroyed empires. And I was trying to show how positive was construction of nation within the Soviet Empire and even, by the way, within the tsar’s empire. This is where the non-Russian intelligentsia was trained. Most of the Georgian intelligentsia in the first generation were trained in Saint-Petersburg, this is where Chavchavadze and Tsereteli and others came. So that was really interesting.

And then I would say because of my interest in Armenia in the last couple years I’ve turned to writing about an Armenian genocide of 1915. So I’ve made the effort in my advanced age to learn modern Turkish, and did a lot of research. The book will come out next year – 2015 is the anniversary of the Armenian genocide. The book’s title is They Can Live in a Desert but Nowhere Else: A History of the Armenian Genocide.  And that phrase comes from the speech by Talaat Pasha, the Young Turkish architect of the genocide.

So now I’ve got these books coming out – Young Stalin will come out and Armenian genocide will come out – and with my wonderful colleague Valerie Kivelson who does early modern Russian history, at University of Michigan, we’re writing a book together called Russia’s Empires, which tells the whole history of Russia and Soviet Union and Russia.

As a matter of fact, in the book about the Armenian genocide I do not say: “It’s a terrible Turk, and it’s Turks, their culture, they’ve murdered Armenians, it’s in their blood.” Instead I tried to explain why in 1915 in a certain historical situation a government with a certain  affective disposition, that is a mental and emotional state, decided to carry out the most cruel  crime in human history that is the mass murder of a designated people.

In Armenia the whole generation doesn’t like that, they call me a traitor. Because I’m not writing a national history and I’m not anti-Turkish. I’m trying to explain that Turks are not monsters, their human beings that could do monsters things – that’s my view.

In certain moment around 1994 I got a phone call from the University of Chicago, the department of political science. They said: “Would you consider to be considered in our department.” I said “But I’m not a political scientist, but I’ll be happy to be considered.” Eventually, I got this position and for 11 years I was in political science at the University of Chicago and it was wonderful experience. Why? Because political science is very laborious work, they’re very careful about categories, about definition and about explanation. And it helps me in my history as well. Political science is very quantitative, very formal modeling. I respect those things, they’re very strong. But it’s not what I do. My work is more culturally oriented and more time centered. So, I find myself balancing between the caution of political science and the sensitivity of history which is always aware of the deep texture, of the temporal context.

And the most important thing for a historian. There’re two kinds of history you could say. The official history, which is a history, where states write about themselves, organic intellectuals- agents of the state write about themselves, just showing how great they are, describing the current relations of power, who’s up, who’s down. Historians often help to make modern states and modern nations.  And there is a tiny spark which is important to preserve and to develop which is critical history, which is questioning those dominant paradigms.

And hopefully this critical history will continue to be developed because without it we can to go down the wrong road.

One of the first differences between the Soviet Union and Russia today is between order and chaos. In the USSR everything was very orderly, things were already set in place, you knew where you were going, where you were born, how you lived, how you died, everything was set. System like this can operate well. So, no matter what you did and it happened to me too, every day you broke the rule. No matter what you did there was some law you were breaking (laughs). You bought something on black market, whatever. But it was the system that was in place, that needed to be deeply reformed. And there was some wonderful attempts by Gorbachev which was unfortunately very rapidly carried out and led to a disastrous conclusion which was the collapse of the system and total disintegration of the Soviet Union which, I share Putin’s view, is a great catastrophe. Not a worst thing in the 20th century – we had World War I, we had World War II, we had the Holocaust, we had the Armenian genocide – many bad things happened in the 20th century. But the fall of the Soviet Union, the way it happened, was also tragic and we’re still experiencing the tragic results and aftermath of the fall of the empire. It hunts us with the Ukraine today, in Nagorny Karabakh, in the civil war that Tajiks suffered - so it is still an ongoing process. The Soviet Union in some way is still disintegrating and new society is being built. The sad thing was when the Soviet Union collapsed and really there was a possibility of creating new world order, of the European home from the Atlantic to the Urals and even to the Pacific – people were not taking that seriously. And there I would blame largely the west. Instead of thinking creatively, and George Bush the first by the way did think more creatively about it, he didn’t want the Soviet Union to collapse, by the way – instead of trying to create a new security architecture, a new paradigm, they went back to the old way and they pushed up to the border of Soviet Union and therefore Russia is very weak state at that time, couldn’t resist and didn’t resist until 2008 when Putin went to war with Georgia provoked by Saakashvili. Now this crisis we have today is also part of that problem. We are far away at the moment from thinking creatively about a new security arrangement of the world and that’s becoming a serious problem.

Everything are doing here at the Higher School of Economics is very much on the American level and American model. There are seminars, master classes, presentations, I gave formal and informal lectures – there were questions and answers. So I don’t see as much difference at that level. Maybe there’s difference on the undergraduate level, I’m not sure.

Now there’s a global development of the field of imperial studies, studies of politics of diversity in imperial and post-imperial contexts. The trend now is that specialists in other fields (history of colonial empires) are forced to read new type of Russian and Soviet historiography. You want to write a comparative history of empire? You can’t leave out the experience of the Russian Empire and you can’t leave out the Soviet Union. And this historical experience offers new and different analytical models for understanding empire and politics of diversity.