The City of Bridges: Top 5 Must-See Bridges in Saint Petersburg And History Behind Them

Ruslan Panov speaks of five the most artistic, beautiful, eye-catchy, and simply memorable bridges in Saint Petersburg. Join him in his voyage around the City of Bridges.

When you visit the City of Bridges, you’d better know where to start your journey. In this article you will find information on top five the most known bridges of Saint Petersburg and learn more about them.

Trinity Bridge is a bascule bridge, third permanent bridge across the Neva River. It connects Kamennoostrovsky Prospect with Suvorov Square. Mostly famous for its Rostral Columns, it is considered to be one of the most beautiful bridges in St. Petersburg for a good reason! 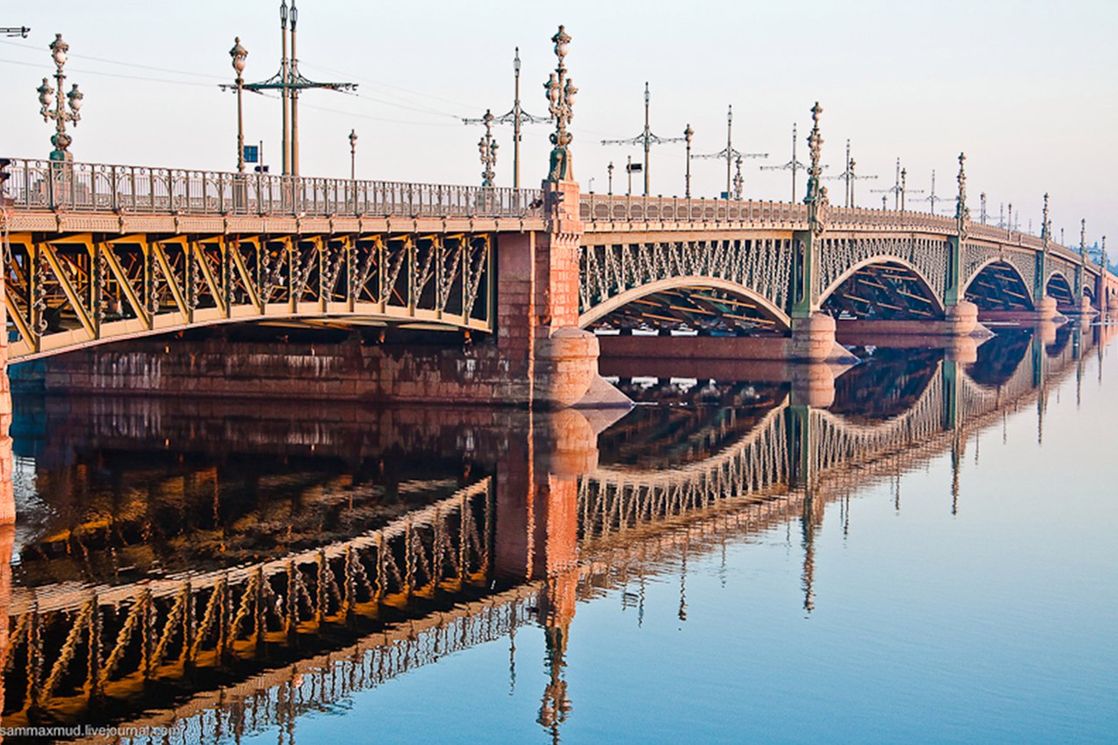 Initially, the bridge had nine spans, five of which were permanent riveted metal spans. A three-arch granite viaduct connected the metal central section to the right bank, and a double-leaf adjustable bridge connected it to the left bank. The design of the central spans, in which individual uncut beams connect more than one span, significantly reduces the load on the central part of the arches, reducing the necessary support in the river and giving the span structures a gentle arch shape. The bridge is decorated with cast iron gratings with artistic casting, granite pylons with lanterns and metal tricolor lanterns in the Art Nouveau style. Despite its clearly memorable appearance, confusion often arises as some consider the bridge to be a «chameleon». Better see for yourself!

The bridge was built between 1897 and 1903 by the French firm Société de Construction des Batignolles. Interestingly enough, although the bridge is named after the Old Trinity Cathedral (which used to stand at its northern end), it was not always known to the general population by that name. In the 20th century, it changed the name twice, at first known as Equality Bridge (мост Равенства, 1918–1934) and then as Kirovsky Bridge (Кировский мост, 1934–1999). No matter what name it had, the bridge continues to remain a sight to behold.

The Alexander Nevsky Bridge connects the central part of the city and the right bank of the Neva River. Who have not heard about this one? Named after the famous Russian military commander and politician Alexander Nevsky, it was not only the largest bridge in the city, but also one of the largest possible bridges of this type in the country. Of course, eventually it was removed from this pedestal, but history remembers. 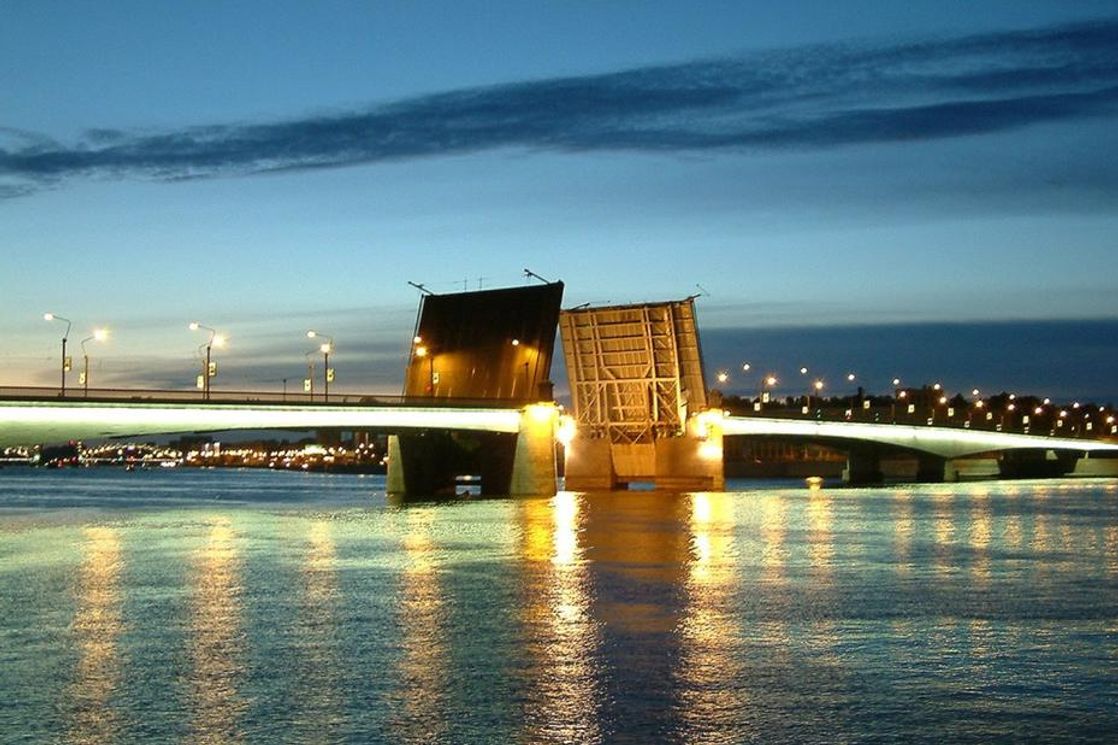 The bridge is seven-span, the central span is 50 meters long and is a drawbridge. Five spans are located above the mirror of the river, and two extreme - over the embankments. Stationary side spans, including above the embankments, are blocked by two three-span continuous pre-stressed box-shaped structures with a curved outline of the lower zone. Who`s genius mind does it take to create such construction?

The bridge was built from 1960 to 1965 under the working title Old Nevsky Bridge. Designed by a group of architects A. Zhuk, S. Mayofis and Yu. Sinitsa, the bridge complemented the appearance of neighboring buildings in the vicinity. The project conducted a team of engineers from Lengiprotransmost Institute. On November 5, 1965, the bridge was open to traffic. Verification tests were carried out using a column of army tanks.

Bridge of Four Lions is a first pedestrian bridge in this list, crossing over the Griboedov Canal, connecting L'vinyi Drive to Malaya Podyacheskaya Street. Getting its name from four cast-iron sculptures of lions by sculptor P.P. Sokolov located at the corners of the bridge, Bridge of Four Lions is one of the only three surviving pedestrian chain bridges in St. Petersburg. Its rarity is surely deserved, as you are about to find out. 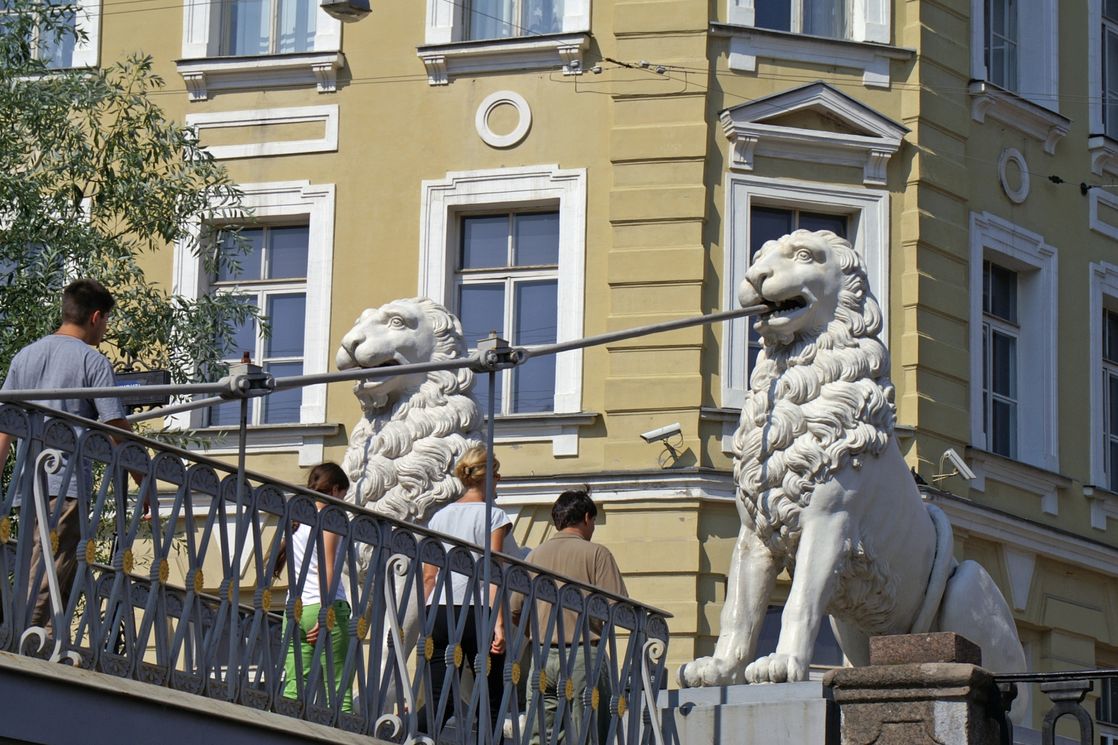 Single-span suspension bridge. The span consists of two welded two-tee beams made of low alloy steel, combined with a chain hanging system distribution band. At the entrance to the bridge on cast-iron pedestals sculptures of lions are installed. Who put these predators on a pedestrian bridge?

The sculptures of lions were performed by the sculptor Pavel Sokolov. Work on the creation of models lasted from May to September of 1825, and alabaster forms were also created by the sculptor. The sculpture was supposed to be minted from copper sheets, but then the figures were cast from cast iron at the Alexandrovsky Iron Foundry. Lion sculptures were painted with white matte marble paint, which makes them look particularly real. Try not to stare too long!

Bank Bridge is another Saint Petersburg`s pedestrian bridge. Crossing over the Griboedov Canal in Tsentralny District of the city, the bridge connects two of the city`s islands. Commonly believed to be an outstanding monument of bridge building architecture of the first quarter of the XIX century, the bridge undoubtedly catches the eyes of both tourists and citizens alike.

Bank Bridge is a single-span suspension bridge. The span consists of two chains, pendants, and a wooden canvas. The role of the pylons is performed by the cast-iron frames (frames) decorated with sculpture, fastened with anchor bolts through the masonry to a wooden grillage, pressed from above and below by massive cast-iron plates, to which bearing chains are attached. At the entrance to the bridge on cast-iron pedestals, sculptures of winged lions are installed. The wings of the griffins and some details of the bridge are covered with gilding. Lamps in the form of truncated balls of milk glass with a top cast ornamental cover made of bronze alloy are fixed on the heads of the sculptures.

The need for the construction of the bridge was due to population growth in the area. The bridge was engineered in 1826 by Wilhelm von Traitteur and opened on July 24. Its got it`s name after the nearby Assignment Bank. The bridge is particularly famous for the corner sculptures of winged lions (although they are often mistakenly called griffins) by the previously mentioned sculptor Pavel Sokolov. The main reason for that is probably a common legend among the citizens that if you rub a lions paw, an inevitable fortune awaits you in the future. Why not give it a try? You never know.

Egyptian Bridge sits on the top of this Top 5 and many think comments are unnecessary. Just one look at this monument of history and culture sends you to a different era. Carrying Lermontovsky Avenue over the Fontanka River, this bridge is a true testimony to the historical interest in Ancient Egypt. Let`s dive right into what came to be known as the early 19th-century`s Egyptomania.

The bridge is single span. The bridge route crosses the Fontanka. The main beams of the span structure are double-hinged frames with metal welded crossbars. Its granite abutments were topped with cast-iron sphinxes and hexagonal lanterns. The abutments of the bridge are monolithic reinforced concrete on a pile basis. Sounds secure, right? But is wasn`t always like this.

It was constructed in 1825-1826 based on the designs by two civil engineers, Von Traitteur and Christianowicz. The current structure, including the Sphinxes and some other details of the 19th-century bridge, was completed in 1955. An unusual feature is a pair of cast-iron gates with Egyptian-style columns, ornaments and hieroglyphs with many details of iron products, artfully gilded. An interesting fact: the original bridge, which was used both by pedestrians and horse-drawn vehicles, collapsed on January 20, 1905, when a cavalry squadron passed over it. Despite a rough start judging by this collapse, the bridge eventually found its way into the hearts of citizens and tourists alike. And who does not like an old-fashioned success story?