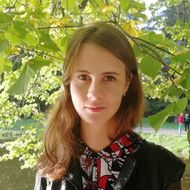 Article
“One Nation—One Language” The Ambiguity of the State Language Policy and Policy Towards Minorities in Contemporary Latvia and Ukraine﻿﻿﻿.

In bk.: Handbook of Revolutions in the 21st Century. The New Waves of Revolutions, and the Causes and Effects of Disruptive Political Change. Springer, 2022. P. 781-810.

History of the October Readings

The October Readings is a common name for the already traditional scientific conferences and the student youth forum preceding them, which take place at the end of the third week of October starting from October 2012.