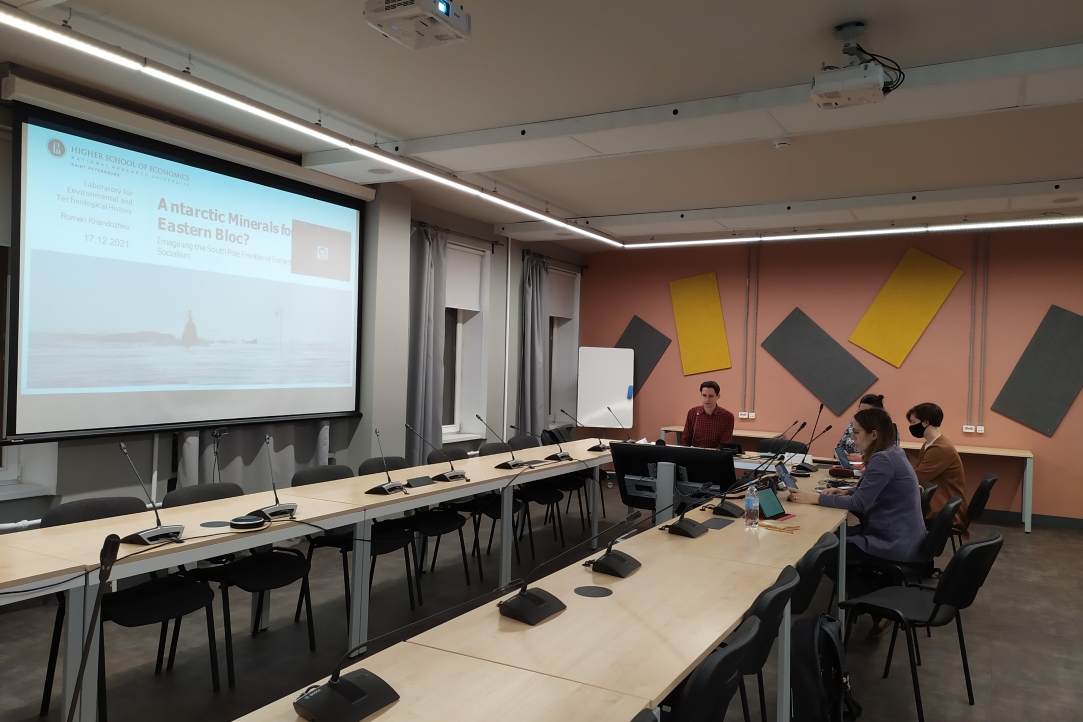 Please fill in the form to participate.

The USSR is sometimes seen as a “postcolonial and avowedly non-imperial empire,” despite its continuous territorial expansion through invasion or subversion. At the same time, the Soviets used anti-colonialist rhetoric as a weapon in the propaganda war against the West, pretending to act on a global scale in the name of all-human progress as opposed to capitalist exploitation. This discrepancy profoundly affected Soviet Antarctic endeavors, which combined significant investments in fundamental science, ambitions for territorial domination, and vivid extractivist imaginary. Russia lacked experience in governing oversea colonial possessions, yet after the Second World War it became eagerly involved in exploiting marine living resources of the South Ocean and created the largest network of scientific stations encircling the Antarctic continent. From the International Geophysical Year 1958 onward, the Soviet Union had been developing a program of geological explorations in Antarctica, deliberately aimed in gaining information for future mineral prospecting. Although actual mining never took place, Soviet geoscientists who worked in the institutes of the Ministry of Geology, in their Antarctic activities of the late 1950s – 1970s were driven by the same resource logic as their colleagues occupied with the developments in the Russian Far North. The paper under discussion examines how colonial model of the Soviet governance (also in form of “internal colonialism”, using Alexander Etkind’s conceptualization) could help to revisit techno-economic, institutional and discursive nature of the Soviet Antarctic project. Based on the documents collected in Russian, Polish and German archives, the paper also discusses how the Soviet power tried to use assumptions and speculations about Antarctic minerals in order to mobilize support within the Eastern bloc for its geopolitical ambitions in the South Pole region and seize control over the important “resource frontier” of the world.

Roman Khandozhko is a historian of Soviet science and technology. Since September 2021 he is working as a postdoc research fellow at the Laboratory for Environmental and Technological History, Higher School of Economics in Saint Petersburg. He holds a PhD degree in history from South Federal University (2010). His publications include „Quantum Tunnelling through the Iron Curtain: The Soviet nuclear city of Dubna as a Cold War Crossing Point“ in Cahiers du Monde russe, 60/2-3, 2019; „Dissidence behind the Nuclear Shield? The Obninsk Atomic Research Centre and the Infrastructure of Dissent in the Late Soviet Union“ in Jahrbücher für Geschichte Osteuropas 66/1, 2018. His current research is focused on Soviet energy and resources politics in the context of global environmental turn of the 1970s and 1980s. At HSE he pursues a project „Natural Resources, Science, and the Struggle for Geopolitical Dominance in the The Arctic and Antarctic during the Cold War.“

Date
17 December  2021
About
Laboratory for Environmental and Technological History